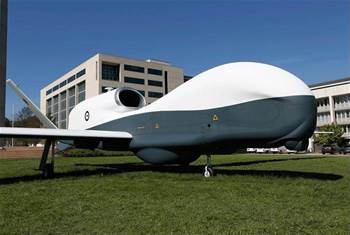 The manufacturer of RAAF’s new $3.8 billion Triton drone program has returned fire in the escalating row over the Department of Defence’s bid to wrest control powers over all technological research in Australia, warning co-investment in key local projects is at risk.

American defence and aerospace giant Northrop Grumman has publicly locked in behind the Australia’s university sector in an effort to repel the research control push, saying “recommendations from Defence may not achieve the optimum balance of these interests, and may have the effect of limiting investment into critical research and innovation between industry and its research partners”.

The move by the military systems heavyweight to back the digital systems R&D sector puts a significant hole in Defence’s ambitions because it demonstrates the miltech sector is unwilling to back the sweeping new powers because they could cruel project commercialisations.

The key target in Northrop Grumman’s beef with Defence is the politically sensitive $5.3 billion Western Sydney Airport project where the company is ploughing in big money to help create a tech precinct to generate local jobs.

“Through its $50 million-dollar investment to establish a presence in the future Western Sydney airport precinct, Northrop Grumman Australia is making a significant commitment to enhance and sustain the Australian Defence Force’s high-tech electronic capabilities,” Northrop Grumman’s submission to review of the Defence Trade Controls Act 2012 said.

“This investment will utilise research partnerships between academic institutions and industry partners to access world-leading expertise, equipment and facilities that support the development of advanced electronic systems and technologies.

“The appetite for such investment and collaboration could be significantly lessened should the additional control measures proposed by Defence be implemented without extensive prior Industry collaboration,” the submission signed by Northrop Grumman Australia CEO Ian Irving said.

At the core of Defence’s bid for massively expanded controls over technology research conducted in Australia – which include entry, search and seizure powers – is the argument that the national security environment has changed to the point that non-miltech specified research must fall under Defence’s control.

Universities, including the influential Group of Eight (G8) are ropable at the power grab and its timing and argue it would allow Defence to retrospectively designate projects as security sensitive without any prior warning.

The tensions between the research sector and Russell have been further inflamed by the decision by Defence to not show its hand on what new powers it is seeking under the mandatory legislative review until after most institutions and industry had already lodged their submissions.

The timing of fallout from the review comes at an inopportune moment for the government which is rapidly trying to drum up local and international support for a defence and associated industries jobs creation push spearheaded by Defence Industry Minister Christopher Pyne.

A key part of the government’s push is to get defence and related industries to help revive areas of industrial and manufacturing decline in states like Victoria and South Australia as well as sending defence vehicle builds to Queensland.

Civilian IT vendors are certainly keen to climb onboard the big Defence tech push as government agencies extract better value for money from suppliers.

Pyne on Thursday cut the ribbon on a new national security and defence facility for systems integrator and consultancy Accenture.

Accenture describes the new facility as being “designed with a human-centric focus” with a “vibrant collaborative environment that encourages co-creation and breakthrough thinking between employees, defence and security agencies, and other digital innovators”.