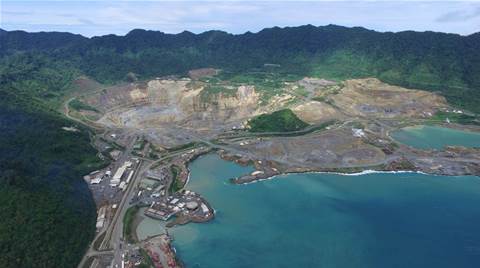 Newcrest Mining has deployed a private LTE network built by Telstra at its remote Lihir gold mine in Papua New Guinea.

The miner said that the new private network would “allow for greater levels of safety, remote operation and automation” at the site.

It will also work with existing wi-fi at the mine, using so-called ‘HetNet’ functionality to enable users and vehicles equipped with mobile equipment “to seamlessly switch between LTE and existing wi-fi networks without impacting critical mining applications.”

“Every kind of production vehicle asset, including trucks, drills, excavators, dozers, shovels and barges have now been connected and operationally proven over LTE,” Newcrest said in a statement.

“This has revealed significant performance improvements in terms of reliability, speed and latency.”

The miner said that LTE had resulted in an 80 percent uplift in site communications reliability.

Future work on the LTE network is expected to “enhance coverage in-line with Lihir’s 20 year mine plan, and provide for expansion of coverage and capacity across the mine, processing plant, port and camp.”

“The Lihir mine extends 300m into a volcanic crater and our workers can often be exposed to elevated temperatures,” Newcrest Lihir general manager Chris Jordaan said.

“Tele-remote and autonomous mining technologies are fundamental to working the hot work areas that will become more dominant features of our operation in the future.

“The private LTE network will be a great enabler for these technologies and coupled with the existing in-pit wi-fi network, we have been able to create a heterogeneous network that covers the whole mining lease.”

Newcrest’s deployment of a private LTE network built by Telstra follows similar moves by Western Australian miners such as Roy Hill and South32.