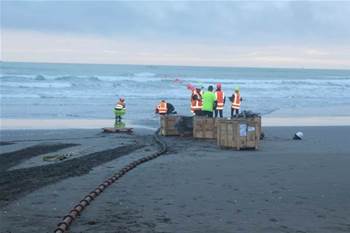 A competitor to the main cross-Tasman connectivity provider has entered the fray as the 3200km Tasman Global Access (TGA) data cable running from Sydney to New Zealand enters service.

The TGA connects Sydney's Narrabeen Beach and Raglan on the Waikato coast in New Zealand. It is funded by Vodafone, Telstra, and Spark, and has a design capacity of 20 terabits per second.

The cable was originally scheduled to be completed late 2014 and have a starting design capacity of 30 Tbps.

But Telstra scaled down its investment in TGA, causing the project to be delayed as the two other telcos had to make up the funding shortfall for the A$93 million link.

Nokia-owned Alcatel-Lucent Submarine Netwoks started building the cable system at the end of March last year, with a construction completion date in January,

The cable provides telcos and internet providers an alternative to the existing Southern Cross Cable route across the Tasman.

The Southern Cross Cable is the main connectivity provider to the US for Australia and New Zealand. It is currently seeking funding for its Project NEXT upgrade, which would add 60Tbps capacity across the Pacific.

Next year, a second link spanning Sydney, New Zealand, and the United States, the Hawaiki Cable, is expected to be completed.