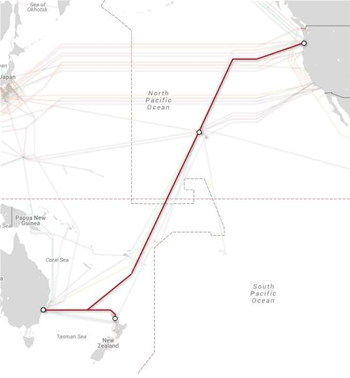 Australian and New Zealand network providers will have an alternative to the Southern Cross Cable System for connections to the Pacific Islands and the United States, after Hawaiki Cable announced its link will finally be built.

The 14,000 kilometre cable is expected to cost around A$452 million to complete, spanning Australia, New Zealand, Hawaii, and Oregon in the United States, with spurs to the Pacific Islands.

Funding is based on a mix of equity, debt and capacity presales contracts, Hawaiki chief executive Remi Galasso told iTnews. The operator has spent the last decade seeking funds for the project.

Cable laying firm TE Subcom, which is contracted to build Hawaiki, will similarly lend an unspecified amount of money to the project.

The government-owned academic Research and Education Advanced Network New Zealand (REANNZ), which in 2014 signed a 25-year contract worth A$60 million, welcomed confirmation that the Hawaiki cable would finally be built.

The academic network currently has an agreement with AARNET for 40Gbps shared bandwidth donated by Southern Cross.

REANNZ has initially booked capacity of 20Gbps to the United States and 20Gbps to Australia on Hawaiki.

"This will rise substantially over the 25-year contract term," Ferguson said.

Originally destined to be routed between Sydney and Auckland, Hawaiki will now instead land at Mangawhai Heads, Northland in New Zealand.

Other landing stations include Equinix's SYD4 facility in Sydney, Kapole in Oauhu, and Pacific City with backhaul to Hillsboro/Portland in Oregon.

The cable is expected to be ready by June 2018, Galasso said.

News of the Hawaiki cable construction comes on the heels of Vodafone New Zealand, kiwi telco incumbent Spark, and Telstra starting construction on the Tasman Global Access link after a two-year delay.

This week also saw Telstra, Optus and SubPartners kick off the long-awaited APX-West cable between Perth and Singapore.