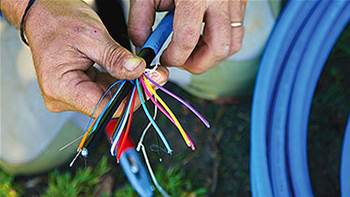 What a direct link to NBN Co could be worth.

Internet users whose service providers are directly linked to NBN Co are likely to see better speeds than those whose provider connects to the NBN through a sub-wholesaler, new numbers show.

The numbers are contained in the appendix of the Australian Competition and Consumer Commission’s (ACCC’s) third report on broadband speed monitoring, released today. [pdf]

The latest report offers a mostly stable perspective on NBN speeds and performance to the last quarter’s numbers, albeit that the new report has a higher number of data points and is therefore considered more accurate.

What is likely to be interesting, though, is a new section comparing on- and off-net download and upload speed performance.

The measure is in its infancy, hence being buried at the back of the quarterly report; the off-net measure for now is based on tests from only 31 services.

However, for end users whose connection is served by a sub-wholesaler, the numbers don’t make easy reading.

Where on-net users achieve 90 percent of the maximum download speeds overall, offnet ones get 82.9 percent. The gap is basically the same in the busiest hours of network usage as well.

The report finds this gap is not replicated in upload speeds, where on- and off-net users get more or less the same - relatively high - performance.

While the numbers are still a work-in-progress, they could - at a later stage - become important for a number of players in the NBN ecosystem.

The ACCC report suggests the figures could “provide a high-level indicator as to whether there could be disparity in the busy hour provisioning between these groups suggestive of a wholesale market that is not operating efficiently.”

That is, any sustained discrepancy between on- and off-net performance could warrant regulatory intervention.

The NBN model already favours operators with scale; any internet providers that can’t afford to meet the barriers to entry, such as connecting to the 121 points of interconnect to serve a national user base, usually have to buy NBN through a sub-wholesaler.

That those predominantly mid-sized or smaller providers could be consigned to lesser NBN performance because they can’t afford a direct NBN connection could become a regulatory issue (adding fuel to past calls in a similar vein from RSPs).

It isn’t just small RSPs that avail themselves of sub-wholesale arrangements; as the ACCC report notes, “some adopt a hybrid model of supplying on-net services in some locations and off-net services in areas where they are yet to build scale.”

Long-term performance discrepancies between on- and off-net services could make the hybrid model difficult to manage for RSPs, and open them to penalties if parts of their network underperforms compared to others.

In the latest quarter, TPG eclipsed Aussie Broadband in average download speeds, both overall and during the busiest hours.

There were also some significant movements in latency, with numbers down almost across the board (barring iiNet, whose number were up slightly).