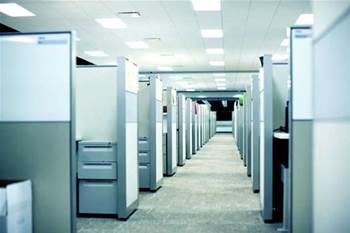 Backs down on enterprise market war.

NBN Co has yielded to industry blowback over its enterprise and government business, declaring it will stop contracting directly with users and share sales leads with retailers.

The decision is likely to end what had become an increasingly combative relationship between NBN Co and retail service providers (RSPs) over NBN Co’s participation in the lucrative enterprise and government (E&G) market.

As reported by iTnews in December, RSPs had two main issues with NBN Co: its insistence on overbuilding their existing dark fibre into commercial buildings, and its insistence on striking deals directly with end users, despite being a wholesale-only entity.

On Tuesday this week, NBN Co said it would stop overbuilding others’ fibre and try to use it instead to serve E&G customers.

Now, NBN Co has also said it will let RSPs own the relationship with E&G users, instead of striking direct deals.

“In response to this feedback, NBN Co will evolve its enterprise contracting model so that RSPs will in all cases have the direct contractual relationship with enterprise customers,” NBN Co said in a statement.

“Previously, NBN Co has at times contracted directly with enterprise customers to build connectivity ahead of those customers engaging one or more RSPs to provide operational broadband services.

“The company will continue to engage with enterprise customers through its engagement team to understand their infrastructure requirements, and to educate and stimulate demand for nbn wholesale services.”

NBN Co will run consultations with industry on both issues.

On today’s backdown, it will canvas “how any sales leads or inbound interest should best be shared with the industry on a transparent and non-discriminatory basis.”

This means it has taken onboard industry suggestions to establish some form of channel program where leads can be farmed out to RSPs.

NBN Co said it would publish a consultation paper on how it will manage E&G relationships and leads by February 7.

"We are making this announcement now to enable prompt, equal and transparent awareness of this intent amongst all customers, RSPs and other interested parties," it said.

"We’re pleased to see NBN Co has acknowledged the industry’s view that it should not be contracting directly with customers," a Telstra spokesperson told iTnews.

"As we have said before, we believe that NBN Co contracting directly with end customers is not consistent with the legislation that governs the industry, and it needs to stop it now.

"NBN Co was established to be a wholesale only provider and this is mandated in legislation.  This was to ensure NBN Co did not engage in retail sales activities or preference itself or an RSP on pricing or terms of supply. The ACCC action last year revealed this was in fact happening."

Telstra's spokesperson said the backdown was also a "good result for customers as it removes the complexity of having to deal with multiple suppliers and contracts" when agreeing to take an enterprise-grade service overe the NBN.

Telstra noted that the detail of the changes still need to be reviewed.

"We need to see the detail of what the changes will mean in practice and when they will be implemented," the spokesperson said.

"We think it is important that NBN Co clarify the implementation timing for the industry.

"We’ll engage with NBN Co on the consultation and continue to hold them to account on their equivalence and wholesale only obligations."

Optus' vice president of regulatory and public affairs Andrew Sheridan called it "a very welcome move by NBN Co as it brings its enterprise model back into alignment with the industry structure and maximises the benefits for enterprises."

"NBN Co plays a valuable role in improving competition and access to enterprise grade services and we look forward to close collaboration with NBN Co through its consultation process," Sheridan said.

"In my view, NBN Co’s business services model should operate in exactly the way its retail one does - providing wholesale access to facilitate as much competition as possible," Britt said.

"We agree with the larger providers that direct contact between NBN Co and potential business/enterprise customers must be off the table, for obvious ethical reasons.

"The new overbuild agreement appears to be a compromise that will not significantly impact NBN Co’s ability to provide services that smaller providers can take advantage of, and ultimately provide enterprise customers with much more choice."

Exetel's corporate sales director James Linton said he was "glad to see [NBN Co] have heeded the advice of the Australian telecommunications industry to resume the traditional (and working) model of RSPs engaging directly with end businesses to find the best solutions for these customers."

"I personally look forward to working with NBN Co on developing a fair and equitable model to share their sales leads and any other inbound interest that they are sure to generate with their future campaigns," Linton said.

"This is especially important for a provider like Exetel, who as the largest independent provider in the Australian market, does its best to cherrypick solutions using our relationships with all major fibre providers, giving our customers the best possible outcome for their particular location/s and requirements."

Macquarie Telecom, meanwhile, welcomed "the decision by NBN Co to avoid direct enterprise deals while continuing to educate corporate customers on the benefits of using NBN in conjunction with RSPs," group executive Luke Clifton said in a statement.

Aussie's Phillip Britt indicated that having NBN Co in the enterprise market was a positive overall.

"As a smaller provider that has had difficulty accessing competitive wholesale prices, we believe NBN Co absolutely needs to be allowed to operate in the business space to enable competition," he said.

"We have already seen significant price reductions for regional areas, and providers like us are now starting to win larger customers who would have traditionally only gone to the 'big four'.

"What NBN Co's business products bring to the market are: uniform pricing no matter what size RSP you are; wide network reach, probably the largest for business ethernet services; the ability for businesses to have fibre built into locations that otherwise would not be viablel certainty around build pricing with “no surprises”; [and] giving the end user choice of RSP, rather than being locked into who owns the underlying fibre asset."

Vocus was also positive on the role that NBN Co can play in the E&G space ongoing.

"When NBN Co operates within its wholesale-only remit, it can play a positive role in the enterprise market," Russell said.

"Vocus looks forward to working collaboratively with NBN Co and the industry to secure the right approach to utilising existing fibre assets and a constructive role for NBN’s industry engagement team.”

NBN Co has been under sustained pressure to change its approach to the E&G market since receiving a formal warning from the Australian Competition and Consumer Commission (ACCC) in October last year.

An iTnews investigation published in December last year found that little had changed in the two months following the formal warning, and that industry remained aggrieved with NBN Co's attitude and perceived lack of action on key points, such as direct dealing and overbuilding of existing commercial networks.

The criticism had ramped up substantially in the past week, with Optus breaking its long silence on the issue, and Vocus calling for NBN Co's industry engagement team - which has made direct outreach to hundreds of top E&G accounts - to be shut down or structurally separated from the rest of the company.

At the same time, NBN Co's E&G approach faced fresh scrutiny from the ACCC over concerns that it was undercutting existing commercial operators using a cross-subsidy from its residential network.

The increasingly combative environment was never going to play to NBN Co's favour, given it sees the business market eventually contributing up to 20 percent of its total revenues.