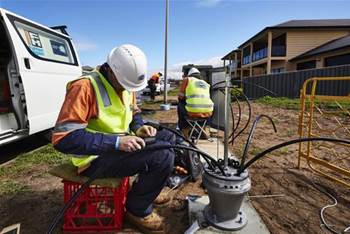 Where the other underperforming services will move is unclear.

NBN Co has upgraded 3000 premises originally assigned fibre-to-the-node technology to full fibre in order for them to meet the minimum speeds set out in the government’s statement of expectations.

The number was revealed just before Christmas in response to a question by Labor Senator Anne Urquhart on the number of premises where NBN Co has “overbuilt FTTN with FTTP.”

“Approximately 3000 premises have had an infrastructure change and are now operational on FTTP,” NBN Co said in response.

iTnews has now confirmed that those 3000 premises had underperforming connections that couldn’t achieve peak speeds of 25Mbps, as all premises are required to under the government’s statement of expectations.

NBN Co has previously shown 1.3 percent of all FTTN premises are incapable of 25Mbps peak speeds, and must therefore be given a different access technology to connect to the NBN.

The 1.3 percent figure is over a year old now, and it is unclear whether there has been any movement in the proportion of FTTN services permanently incapable of reaching 25Mbps peak speeds.

If it is still accurate, iTnews previously extrapolated as many as 60,000 premises in the FTTN footprint would need to be given a different access technology by mid-2020.

But that would mean most have been - or aren’t being - given full fibre, since 3000 premises out of 60,000 is only about five percent.

What the other 95 percent of premises with underperforming FTTN connections are being given isn’t apparent.

iTnews also understands that the 3000 premises shifted from FTTN to FTTP are not part of NBN Co’s change of access technology or COAT program, which is testing - among other things - long-term upgrade paths for the millions of users in the FTTN footprint.