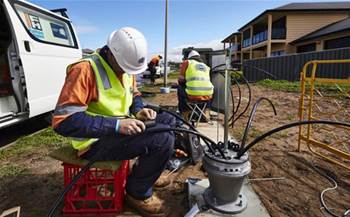 With 31 more waiting, out of hundreds of possible trial spots.

NBN Co has upgraded just 20 premises from copper connections to full fibre as part of a trial, filling less than five percent of the available places.

The number was revealed at senate estimates on Tuesday night and came after the company had repeatedly avoided disclosing the trial take-up numbers.

The trial upgrades, from either fibre-to-the-node (FTTN) or fibre-to-the-curb (FTTC) to full fibre, have been shrouded in secrecy since they were announced late last year.

Initially, NBN Co said that 10,000 FTTN premises would be involved in the trial, but this was later revised down to 500 FTTN premises, and an additional 25 FTTC premises.

While there’s been feverish interest in participation in the trial among users, it’s been unclear how to do so, or even which retail service providers (RSPs) are participating.

In that context, the number of customers that have actually managed to participate in the trial is even more surprising, coming in nowhere near even the 525 cap.

“We have 20 premises connected… and we have 31 more in the pipeline,” NBN Co CEO Stephen Rue said of the trial numbers on Tuesday night.

Rue also said that just seven retailers - out of a pool of about 200 - signed on to trial the upgrades.

Chief operating officer Kathrine Dyer indicated that many retailers opted out of participating in the trial, owing to issues including the amount of IT rework that would be involved in a short timeframe.

“That therefore limited the numbers that would participate in an early trial.”

The test period - for FTTN upgrades at least - is now almost over, with NBN Co intending to open upgrade orders to 50,000 premises from late March.

To qualify, customers need to place an order for a plan speed that is higher than they have now.

They must also keep the higher-speed service for a minimum of 12 months; if they try to downgrade within that time, unless it’s for hardship reasons, they will likely be charged a fee.

While NBN Co said the average cost of a fibre lead-in could run to around $1500, the downgrade fee would only be $200 wholesale, Rue said.

It was up to RSPs whether they passed it through to the customer or not.

Asked why the company was only trying to recover a fraction of what it possibly paid in network upgrade costs, Rue said the company’s “concern was clearly that people would upgrade to get a fibre service and then would go back to a lower speed.”

“What this just attempts to do is put a disincentive in place for people to do that,” he said.

“What we really wanted was people who were taking a service that would then be providing additional revenue to NBN Co to compensate for the additional spend.”

NBN Co is overbuilding about half of its FTTN network with fibre at a cost of nearly $3 billion. It will similarly upgrade its FTTC network to full fibre as well, as it tries to make more of its network gigabit capable, which may enable it to increase its revenues and meet its future targets.

NBN Co’s revenues have only just started to rise again after two flat years due to discounts and incentives paid to retailers during Covid.

Rue also revealed the commercial launch of FTTC to full fibre upgrades could be impacted by the upcoming federal election.

When an election is called, federal agencies enter a caretaker period where they must refrain from making large decisions.

NBN Co has previously clarified the types of activities it may not undertake while the caretaker conventions are in play. The company's previous chair broke the conventions in 2016.

"We want to get the FTTN launch first in March and then if there’s any learnings from that, that will drive the timing.

"[The election] is something we need to consider as to whether it’s something we should do or not during a caretaker period or not.

"We will get advice on the caretaker conventions and then we will make a decision on that."