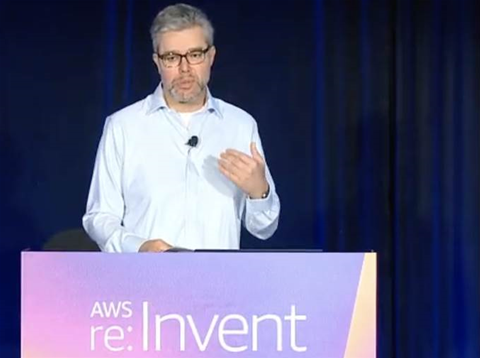 NAB is re-platforming its contact centres to run on Amazon Connect in the hope of getting customers’ questions resolved faster.

It is “the first bank in Australia to use Amazon Connect,” NAB’s general manager of technology for digital and assisted channels Laurent Desegur told AWS’ re:Invent 2019 conference in Las Vegas last week.

Amazon Connect has been honed from a decade’s use by Amazon’s retail business. It now exists as a cloud service in its own right, and is picking up Australian users including NSW Health and now NAB.

While noting NAB’s contact centres “are here to stay,” the bank is hoping to reduce call volumes to its centres, particularly for questions that can be self-serviced.

Desegur said that on the bank’s “vague estimates, 35 percent of all the calls that are made in the call centre already exist as digital service, and people obviously cannot find these services easily so they have to call directly.”

“Many customers call as a result of something they are trying to do by themselves and cannot succeed and they have to call,” Desegur said. “We have a big opportunity for this one.”

Desegur also noted that the number of digitally-active customers that made contact via a call centre is “under 50 percent”.

“This is a low number,” he said. “We're trying to help to boost this.”

NAB is looking to Amazon Connect as a way to recognise self-service opportunities in a conversation and to bring them in directly.

“With Amazon Connect, we can create the notion of self service pathways and that gives us the ability to include, for example, account balances directly in the stream and be able to use that automatically and instantly,” Desegur said.

Connect is also expected to reduce “the misrouting of calls and [to] improve self-service containment”; that is, the percentage of users that resolve their problems in digital channels, without requiring human intervention.

At the same time, the bank is also reworking its contact centre metrics, shifting away from average handling time and more to “quantified value” provided to customers during an interaction.

“We want most banking time spent understanding and supporting the customer,” Desegur said.

“We need to help them resolve the needs.”

Still, by making its self-service functions easier to find - including by recognising opportunities to use them and putting them directly in front of customers - the bank expects call volumes to reduce.

The bank is an early adopter of Connect and had encountered a few challenges making it work at NAB.

“Amazon Connect is a fairly new technology compared to other AWS managed services, and so there are things that we thought originally were included inside Amazon Connect and 'battery included' but this was not the case,” Desegur said.

“We ended up having to build some of these components.”

The bank has also needed to revisit some of the existing technology in its contact centres to ensure Connect runs optimally.

“We needed to revisit some of this infrastructure to get the quality of service we needed on Amazon Connect,” Desegur said.

“It came down to the point where we had to visit some call centres and look at the headset they were using and basically upgrading these devices, because they didn't give us a quality-of-service with noise canceling things we needed. They were too old, basically.”

“In a way we are basically right now in a phase where we are still implementing the basic blocks on Amazon Connect,” he said.

“This is only the beginning, because after this initial re-platforming, we will establish a roadmap and deliver [new] components as we go forward.

“Today, we're at this place where it's still in infancy and we are putting all of the stuff in place to make sure that we get this value added later.”

The bank expects to be in a better position in six months to use more advanced features of Connect “to show the business that we can basically give better value”.

That is likely to include the use of smarter interactive voice response (IVR) technology, including the flexibility to add IVR keywords and options without requiring months and tens of thousands of dollars.

“On our current system, doing an IVR announcement takes about three months for the change and cost about $70,000,” Desegur said.

“So if we have, for example, to add the ‘Apple Pay’ keyword in our IVR path, this is basically the amount of time we have to wait.

“No need to tell you that we didn't take that path when we launched the [Apple Pay] product, and that's unfortunate. We didn't have Amazon Connect at that time.

“With IVR announcement on Amazon Connect, it costs us zero dollars and it's done in minutes. That's one of the advantages.”