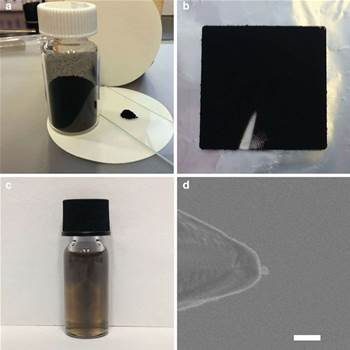 The carbon nanospheres obtained from burning naphthalene in a sample tube, on a quartz slide, dispersed in ethanol and on a 200-nm tungsten manipulator tip.

Australian, Swiss and German scientists have discovered a method of making carbon-based qubits from burnt napthalene, the active ingredient in mothballs, opening the possibility of quantum computers that can operate at room temperature.

Dr Choucair recently completed a postdoctoral fellowship at the University of Sydney.

He said other materials being researched to make quantum devices needed to be cooled "to low temperatures near absolute zero" or "isotopically engineered" to function.

"There are clear and established trade-offs to be considered regarding the feasibility of applying a qubit material system for quantum computing," Dr Choucair said in The Conversation.

The international team used its napthalene-based material to "achieve a new record electron spin lifetime of 175 nanoseconds at room temperature".

Dr Choucair said an electron spin lifetime "exceeding 100 nanoseconds" was needed for quantum computing. The spin state is used by the qubit to store information.

The material made by the research team is also conductive and can be integrated into silicon.

“We have made quantum computing more accessible,” Dr Choucair said.

The next step is to build a prototyping chip, but Dr Choucair said he was particularly interested in the possibilities that could come from longer-term research. He plans to further the work at the Sydney Nanoscience Hub.