Mad Mex's cloud PoS is fresh out of the oven 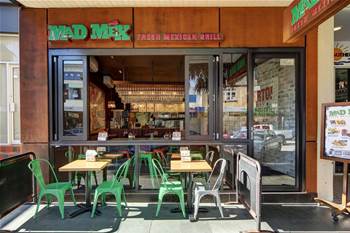 Machine learning next in sweeping overhaul.

Fast food chain Mad Mex is on a rip-and-replace campaign to swap unsupported software used by its national network of franchises with modern, cloud-based technology.

Last year it shifted its operations from on-premise Small Business Server and Excel spreadsheets to a suite of Microsoft products including Office 365 and Sharepoint on its Azure cloud computing platform.

But as a hangover from its time as a start-up with just a handful of stores, there are unsupported Windows XP and 7 PCs sitting in each outlet running Oracle’s on-premise Hospitality RES point-of-sale system.

Mad Mex got the PCs as part of its deal with Oracle for RES, but this arrangement is a “roadblock to efficiency”, according to the chain’s CIO John Boyd.

It’s now signed up to Oracle’s cloud-based Simphony PoS system, a project that entered full force last Friday and which will “finally” allow Mad Mex to move away from Windows XP and Windows 7.

“There will no longer be a reliance on the PC at the store. All our franchises will be able to access the PoS system from anywhere and any device,” Boyd said.

Those PCs that can be upgraded - and whose owners want to keep them around - will move to Windows 10. Others will be removed as owners opt to buy a laptop instead.

“All they really need is a browser,” Boyd said.

“Once we’ve done the PC upgrade we’re going to connect everyone into our domain, so they’ll all have access to Sharepoint and the Office 365 environment.”

Boyd is aiming to complete the PC upgrade and Simphony rollout by June - a deadline he admits is “bullish” but which allows the food chain to be “completely in the cloud” by FY18 and focus its attention on digital, a CRM overhaul, and machine learning.

You might not know it, but all Mad Mex stores offer free wi-fi.

The retailer hasn’t been promoting the fact much because it’s had a bit of an internet headache with a handful of its stores.

Initially the franchisees thought it was the Oracle PoS system dropping out, but after Mad Mex did an upgrade blitz on its routers and switches across the country last year it realised the comms lines were the problem.

It's working with Telstra at the moment to stabilise the shaky internet.

But the company has a second reason to hold back on marketing the free wi-fi: its new Dynamics-based CRM system isn’t scheduled to come online until later this year.

Once that happens, Mad Mex will start feeding all the data it collects from the Ubiquiti wi-fi kit it has installed in stores into its new CRM.

Mad Mex, like many other retailers, is keen to personalise its offerings.

“People want to feel that they’re special and that we’re connecting to them on a one-to-one basis,” Boyd said.

This is where the wi-fi, CRM, and machine learning tools all come into play.

Boyd is planning to feed the data collected from customers logging on to the free wi-fi into the CRM system, and apply machine learning tools to pull out insights that can help Mad Mex’s marketing team better target customers.

It’s still in the earliest of stages of this journey. Boyd is poking around the market to see what’s available in machine learning technology, but being a heavy Microsoft shop he's leaning slightly in that direction.

“The great thing about machine learning is that if set up correctly it gives you insights into customer behaviour that would not be obvious,” Boyd said.

“It starts to really provide the marketing department real insights and allows us to build tailored campaigns."

But he’s keen to make sure Mad Mex doesn’t so much as poke a toe over that ‘creepy’ line.

“Privacy is something that all IT professionals really need to take very very seriously. At any given point you need [by law] to be able to provide anyone their data if they ask for it," he said.

“The trick to getting around that is not to collect too much, and know exactly what you are collecting.”

It’s for this reason that browsing habits are completely off the table for the wi-fi data collection program.

Mad Mex will only collect the data that a user has allowed Facebook or Instagram to share with third parties (customers will be asked to sign in to the wi-fi via either social media network, or through a general portal).

Boyd also plans to explore geofencing, where a device’s GPS or RFID is used to create a virtual perimeter for a real-world geographic area, at some point in the future.

Current applications of this in the market include turning the lights on at your house when you drive up the driveway, or notifying you by text when your child arrives home from school.