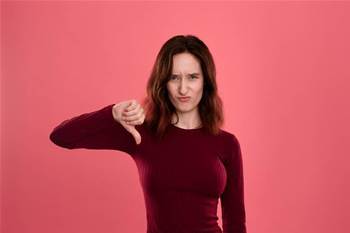 State of the Service census lays bare the struggle to transform.

Australia’s politicians and senior public servants might be talking-up a raft of new apps and online services as proof of a government well on the road to digital transformation.

But it’s more like a slow, narrow and bumpy goat track according to coal face public servants living the dream.

That’s the unfiltered message emanating from the Australian Public Service’s latest State of the Service report, the bureaucracy’s annual health check-up and self-assessment which reveals just one percent of public servants consider themselves working in “digital” roles despite a top-level push.

The 2018-2019 report finds that while there is solid progress being made, the public service is fast running-up against barriers to progress because of decades of rusted on legacy systems coupled with an enduring skills shortage that is constraining its access to talent.

“Measures are being adopted across the APS to boost digital capability, spearheaded by the government’s digital transformation strategy, but much work remains. APS employee census results show only one percent of respondents self-identify as working in ‘digital’ roles, which includes those in cyber-security,” the State of the Service report says.

“Through the 2019 APS agency survey, agencies across the service reported skills shortages and difficulty recruiting to a range of digital roles. Agencies also reported widespread difficulties accessing specialised learning and development to support upskilling. Expected growth in digital roles, and the increasing requirement for digital capability across various public sector professions, will only compound this issue,” it continues.

The findings are a major wake up call ahead of the government’s much anticipated response to the findings of the Thodey root and branch review of the APS. What recommendations the government will adopt or shelve have still not been revealed.

Also in the pipeline are responses to a report by Martin Hoffman on reforming the former Department of Human Services, since rebranded Services Australia, although a speech by its minister Stuart Robert today might provide some guidance.

The vast technology estate of Australia’s welfare agencies has proved a persistent pain point for successive governments because of monolithic legacy systems that have to run a hairball of fractured and business rules built up as a result of political and policy fiddling over three decades.

Patrick McClure’s report into the operation of Australia’s welfare system specifically recommended the matted mass of often overlapping welfare programs and payments be pared back to basics to remove the huge volume of complexity weighing it down.

That still could happen under Services Australia, however the government in the interim has been preoccupied with containing the fallout from the Robodebt scandal that clumsily applied income averaging to create often questionable receivables that were this week ruled illegal by the Federal Court.

Last week the government paused use of the loathed income averaging algorithm, potentially in anticipation of the court ruling that will now feed into a separate class action.

Humans will now do the calculations, which isn’t really very digital at all.

The State of the Service report makes it clear a lot more needs to happen on the digital front to make progress, especially around the use of data that fuels automation and linked online transactions that underpin joined-up government services, the beacon being myGov.

The results of a survey of the “barriers to agency use of data reported by APS agencies” is especially telling. 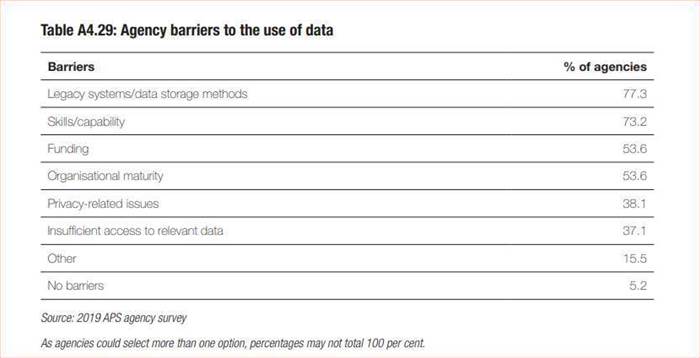 (Agencies could select more than one option, so the percentages aren’t cumulative to 100 percent.)

Cut a different way, that data shows that three quarters of the public service reckon old kit and trouble sourcing talent are the key roadblocks.

The talent issue, which has been previously documented in iTnews, is no big surprise; but the size of the legacy systems issue suggests progress has been slower than otherwise though inside the APS.

Only half of agencies (53 percent) cited money as a concern with privacy and insufficient access to data coming in at 38 percent and 37 percent respectively.

The State of the Service report is also candid about the need to change how digital skills are sourced.

“To date, efforts to boost APS digital capability have focused mainly on the technical expertise of staff working in specific digital roles,” the report says.

“The need to invest in world-class digital capability will continue in many areas of the APS and a digital professional model has the potential to attract digital professionals to the service, provide more fulfilling career opportunities, and assist government to deliver better outcomes to the public.”

That model is likely to be based on a digital and technology competencies model that will be more transferable and mobile across agencies.

One option is for a centralised insourcing model, which Victoria uses under Cenitex, that could supply and coordinate digital and IT labour at a controlled cost across agency projects as they emerge.

While the State of the Service report does not call it out, agencies competing for labour, usually contactors, can create price surges and delays as talent follows the dollar.

The report suggests that a failure to invest on digital front will not end well for the APS, and by implication the government of day.

“While capability is being developed across the APS to change the way it engages with the community, continuing investment and support is required to sustain and build upon collaborative approaches,” the report says.

“Failure to keep up with rising citizen expectations, inadequate funding for information technology modernisation, protracted and repeated testing, and ineffective coordination across silos and different agencies, can all reduce the benefits, and ultimately negatively impact citizens’ experience, of engaging with the public sector.”

Robodebt is living proof of that.