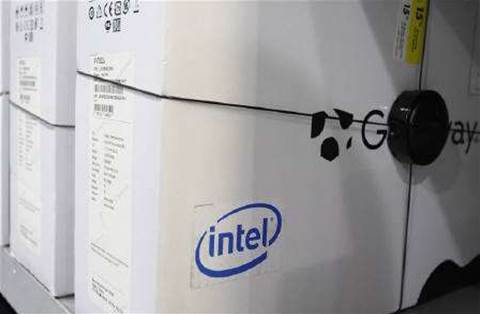 Intel would consider making chips for rivals, but any proposal to use its advanced manufacturing technology to make processors based on a competing architecture would trigger an "in-depth discussion."

Intel views its massive lead in manufacturing know-how as a key asset and opening its factories up to competitors would be a major shift for the industry.

He said Intel would be happy to produce chip cores based on its own architecture for other companies but that allowing rival architectures to be manufactured in its plants would be a tough decision.

"If Apple or Sony came to us and said 'I want to do a product that involves your IA (Intel architecture) core and put some of my IP around it', I wouldn't blink. That would be fantastic business for us."

"Then you get into the middle ground of 'I don't want it to be a IA core, I want it to be my own custom-designed core,' and then you are only getting the manufacturing margin, (and) that would be a much more in-depth discussion and analysis."

Smith said Intel had signed some "tiny" foundry deals in the last year, mainly to gain access to new technology, but a proposal from the likes of Apple was "not in the works today," and the prospect of making chips for others was not driving Intel's investment in capacity.

Manufacturing chips on behalf of other companies would help Intel share out the ever-increasing costs of building more advanced factories.

Intel has honed its proprietary architecture over decades to design powerful processors that now run 80 percent of the world's personal computers.

But it has failed so far to adapt its chips for smartphones and tablets, an exploding market dominated by British chip designer ARM's battery-friendly architecture.

Apple's iPad tablet computer is powered by an ARM-based processor made by Samsung Electronics, according to reports.

Combining Intel's cutting-edge manufacturing technology with ARM's already energy-efficient architecture could give rivals a strong lead and make it more difficult for Intel to sell its own chips.

In its latest breakthrough, Intel this month took the wraps off a new "3D" manufacturing technology that it said would offer higher performance and consume less energy.

It is investing heavily to stay ahead and in April it upped its capital spending plan for 2011 to US$10.2 billion from US$9 billion.

Intel may wait a year or two until its 3D technology is well proven, and then hire it out, said Raymond James analyst Hans Mosesmann.

"Then they can go to guys out there and say, 'Hey do you want some of this? We can sell it to you but it's going to cost you.'"

High levels of investment by Intel and others in capacity have raised concerns among some investors of a potential glut in supply and falling average selling prices, notably in a note from Goldman Sachs on May 19.

But Smith said the capacity increase was in line with demand, driven by a growing appetite for notebook computers in emerging markets.

"We see real data and we have shown our prices have been up six quarters in a row, our mix is good, and our factories are pretty full and we are putting in capacity that is consistent with the unit growth that we have been experiencing," he said.

"We don't put out a forecast specifically for prices, (but) I have said I expect 2011 to be a relatively benign pricing environment based on the strength of our technology."