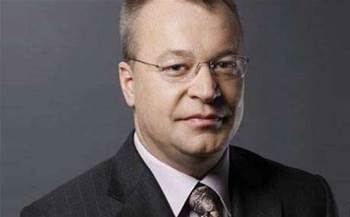 Stephen Elop, the man who helmed many high-profile tech companies through the stormy waters of disruption, is now leading Telstra's charge to transition from a telco to a technology company, and his message is simple: it’s time to sink or swim.

Elop joined Telstra in April, and last week gave his first speech as the telco's new technology and innovation chief, warning that technology companies that fail to recognise and adapt to disruption face doom.

Macromedia initially thrived in the 90s as a dominant player in the web animation development space during the dotcom boom. When the bust came, its sales crashed.

Amid the Silicon Valley carnage, the company, which was eventually acquired by Adobe, was able to survive by steering Flash Player toward mobile devices where it once again became a dominant software development platform for mobile graphics, according to Elop.

In the mid-2000s, the executive headed up the business division for Microsoft’s highly profitable Office software franchise, which had traditionally been sold as a boxed product or through perpetual enterprise software agreements.

“So of course what we did at Microsoft, and this is often what one has to do when faced with the potential of disruption, is that you have to disrupt yourself,” he said.

Elop was referring to Microsoft’s decision to start offering free web-based versions of applications like Word and Excel to give itself an upsell path. However, Microsoft also started working on a software-as-a-service version of the Office suite, which eventually evolved into its successful Office 365 product and on to the establishment of its Azure cloud service.

“The point is that even when you’re in a position of great strength and you see some threats, disrupt yourself, move the industry forward, build from your core strength and some amazing things can happen,” Elop said.

It was on Elop’s third sinking ship that his luck ran out, and his role in its demise was more controversial.

He became chief executive of Nokia in 2010 three years after Apple released its first iPhone in 2007, and it was tearing into the Finnish mobile giant’s market share at an enormous pace.

From an engineer’s perspective, there was nothing remarkable about Apple’s iPhone, according to Elop. Touch interfaces already existed and the iPhone lacked the advanced apps and mobile radio technology of other phones on the market.

However, it more than made up for that in another way, he said.

“It was the first time that the human to computer interface through touch was truly done well and simply, and beautifully with the customer experience fundamentally [without flaw],” Elop said.

Elop had to decide whether to continue with Nokia’s in-house mobile operating system development, go with Google’s Android, or take another path. To some extent Nokia dabbled with all these options but ultimately Elop decided to concentrate the company’s effort on Microsoft’s Windows phone operating system — a decision that would see him accused by Finland’s press as being a Trojan Horse in a long-game Microsoft strategy to acquire Nokia.

Nokia’s market share continued to fall and eventually in 2013 Microsoft bought its mobile phone division for a relatively modest US$7.2 billion. Elop stepped down as CEO of Nokia and returned to Microsoft as head of its mobile devices group, leaving a wave of controversy behind him over a last-minute change to his contract that saw him walk away with US$25 million bonus.

Recently, Microsoft’s chief Sataya Nadella admitted that Windows Phone was a failure. Its market share has dipped below one percent.

Nevertheless, he cited Nokia’s return to strength as a network equipment supplier following its joint venture and eventual acquisition of Siemens Communications as a shining example of how companies facing disruption and “despair” can transform themselves.

Telstra's fork in the road

He believes that Telstra, which faces losing two to three billion dollars in profit from its fixed line wholesale business to NBN Co, is hitting that kind of inflexion point and can make the transition.

“What I have come to recognise is that Telstra has this ability of transformation deep in its DNA," Elop said.

“Think about the decisions that were taken here a decade ago with technologies like 3G. It is periods of this type of courageous leadership that kick off long periods of great services for customers and great growth in opportunities for employees and shareholders.

“Now we have little choice but to think ahead and lead through transformation. This is true for everyone in this room. We all must be doing it."

The point that Telstra is being compensated for its losses is not lost on Elop, and he sees that and the disruptive influence of the NBN for Telstra as twinned gifts. He argued that Telstra needs to “invest aggressively” in leveraging its strengths such as its brand, network, and customer base.

For companies to survive disruption and transformation, certain qualities are required, he said. First is an obsession with customer experience; Elop cited Apple as his top example. Second is a strong understanding of a businesses' own strengths and differentiators.

Thirdly, a company needs an agile and innovative culture; he pointed to Amazon and its shift from selling books to having one of the most successful cloud businesses in Amazon Web Services as a prime example. Finally, a business needs to understand and cope with the customer expectations for a “digital experience”.

Andrew Colley travelled to Telstra Vantage as a guest of Telstra