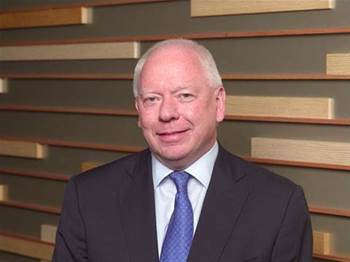 "Recalcitrant participants have started to get more and more involved."

But if there’s one thing he’s certain of, it’s that the New Payments Platform (NPP) won’t be one of them. Not while he's chairman.

After a solid stint on the boardroom and advisory circuit after helming Australia’s two corporate tech shops, the plain-talking and disarmingly frank executive isn’t afraid to admit he’s there to shake-up the bank tech sector for its own good.

“I'm not a status quo type person,” McKinnon tells iTnews when asked why he took the job.

Holed-up in the NPP’s modest and functional office in Sydney’s CBD, McKinnon’s new role is to help steward one of biggest and most difficult shifts in bank systems and culture that have frustrated consumers and regulators alike for decades: the shift to real time payments across the industry.

But to get there McKinnon first has to charm, cajole, push and persevere with retail institutions to keep up the pace on a stack of reforms and upgrades that simply stall unless they are relentlessly prosecuted by regulators and the NPP alike.

As payments system regulator Reserve Bank of Australia (RBA) seriously cranks-up the pressure on banks to make real time payments a reality by integrating with the NPP – few inside the bank tech sector would have missed its top-level sprays – McKinnon must convert perceived urgency into tangible action.

His not-so-secret weapon is a forensic memory of where the bodies of failed tech initiatives are buried, especially when it comes to sectoral reform projects that simply withered on the vine amid sectoral infighting. He’s lived through most of them.

“Australia is a relatively small market as we all know, and the institutions in that market have traditionally not been good at collaborating. In fact, I would say they've struggled to work cooperatively and collaboratively in anything that's strategically important,” McKinnon offers.

Knowing how many times institutions like Westpac and the CBA have tried to float the industry self-reform boat – only to watch be scuttled from the inside – is also knowing what to avoid and what to push.

McKinnon recalls the “Trust Centre”, one of the ancient ruins of efforts to create a transferable digital identity for bank customers by former Westpac CIO Michael Coomer. The idea, much like federated digital identity today is that a central hub would act as a collective trust broker between customers and businesses and eventually government.

McKinnon says Trust Centre’s proponents “expected that everyone will come and nobody came.”

Those words must seem a little prophetic at Australia Post, where a change in executive has seen its much-vaunted Digital iD project come off the boil to a low simmer.

From MaMBO to FOMO

Nearly a decade after Trust Centre, the CBA-led MaMBO also looked a collective real-time banking utility that could keep RBA intervention at bay … until NAB pulled its participation amid fears of competitive disadvantage.

What’s changed since then McKinnon observes, is that (separate from the RBA’s intervention to create the NPP) is that the two areas where banks used to mark out their competitive territory – mortgages and payments – have become commoditised and disrupted.

“The banks were starting to see other entrants coming in. If you look at the opportunity to disrupt banking, the disruptors started in two places, they started with mortgages and they started with payments,” McKinnon says.

Whereas banks previously guarded their payments turf on the grounds of not ceding competitive advantage, the NPP’s mandate has flipped that dynamic to a fear of being left behind in the real time and rich data race.

McKinnon is firm on what it will take to move the needle.

“It's got to get to a point – and hopefully it's close to that – where it starts to become a competitive disadvantage for the individual banks not to be up [on the NPP]. That's a matter of awareness now spreading to the point where people start to put pressure back on their institutions and saying ‘why can't I do this?’”.

Referring to banks, he says that “the pace has picked up in a lot of them”. That shouldn’t come as a complete surprise given regular public roastings by senior RBA staff.

There’s nothing like the fear of missing out (FOMO).

Waiting for the miracle

But there’s also the issue of accelerating the laggards who can hobble the NPP’s wider network effect. In simple terms, because the NPP is a common utility platform it’s effectively constrained to the pace of its slowest participant.

Again, McKinnon isn’t shy about calling out past difficulties but insists momentum is building.

“Some of the more recalcitrant participants have started to get more and more involved up front. Whatever strategically they were spending their money on that was slowing them down, they seemed to have now been allocated more funding than this and they've started making progress,” McKinnon says.

“It's taking longer than people expect, but if you think from …the individual banks’, point of view, it's probably a bloody miracle that it's got to where it is. Even if it's been a bit slow.”

Miracles aside, customers that want to see faster payments and settlement that don’t have banks sitting on their money for days at a time between transfers need to get vocal. McKinnon reckons it’s in the interests of business and consumers to nudge institutions.

“There's a good incentive for a business, particularly anyone who cares about their supply chain and all their customers, to say ‘well the money I've paid them, why isn't it in the bank account?’.

“And the same then goes beyond payroll and superannuation and other things. When this money goes off into the ether, it leaves the premises of the business. And from the business’ point of view, the other thing you would say is the more people who do this, and the stronger the network effect, then when our customers, or when people pay us, we'll get paid straight away as well.”

With PayID a key component of the NPP – it’s essentially a digital banking address you can shift between banks so that the transactional back-end can sync-up – McKinnon has a doggedly practical view of other nascent digital identity plays, whether they are from the DTA, Australia Post or others.

If the utopian grand vision of digital identity is that digital IDs will federate and become interoperable to form a robust and convenient trust ecosystem, there’s still work to be done.

It’s not lost on McKinnon that many of those with a stake in the digital identity world aren’t exactly smelling of roses when it comes to public reputation, whether it’s banks, the government, tech platforms or health providers.

“At the local level he observes that “it all gets tied up to a whole lot of politics around what used to be the Australia Card. It probably starts all the way back there and flies on.

“And I don't know how people will solve that,” McKinnon says.

His views echo that of his recently departed successor at Westpac, Dave Curran who also worked on CBA's replatforming to real time.

What McKInnon is sure of is that the security of NPP transactions is more important than ever because of its real time nature. It’s a process of constant hardening.

And while the NPP’s security may be substantially better than existing card payments systems that are still slowly being virtualised, McKinnon is acutely aware that the removal of the settlement delays means security also needs to be fit for real time.

“Bad guys look for the weakest link. So you can't afford to have a weakest link anywhere in your network or someone will find it,” McKinnon says.