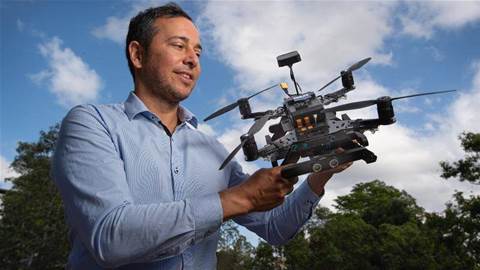 Microsoft’s AI for Earth grant awarded to the Queensland University of Technology will enable researchers to dramatically increase the rate at which they process and analyse drone footage from the Great Barrier Reef to help protect the natural wonder from climate change.

The project, which is run in conjunction with the Australian Institute for Marine Science (AIMS) and Australian Centre for Robotic Vision, uses drones equipped with hyperspectral cameras to scan the reef and accurately identify the health and species of different corals under the water.

Unmanned aerial vehicles are cheaper and more flexible than satellites and drones for aerial surveys. They are also able to quickly cover a much larger area than in-water surveys done by divers or aquatic drones.

Those resulting images are validated with data logged by AIMS divers who have identified corals and assessed the extent of bleaching in pilot test areas.

The trouble, however, is that all those extra bands of light and the sheer size of the reef mean there’s an enormous amount of data to process for the artificial intelligence that underpins the project.

“On a regular desktop PC, processing the data will take months.”

Since the first flight of the project took place 18 months ago, where four reefs among the 3000 that make up the Great Barrier Reef Marine Park were scanned, only about 30 percent of the data collected by the drones has been processed.

The AI for Earth grant will be used to help index the data and gives the researchers access to Azure’s cloud computing grunt.

“You really need to scale up, with the help of cloud services and tools services provided by Microsoft AI for Earth and Azure we can do this within days or hours for the smaller reefs.”

Gonzalez added that processing the data from the initial drone study was just the first step in what he hopes will be an ongoing monitoring program working with AIMS to do follow up analysis of reefs that have already been scanned to see how their health changes over time.

“Time is too short and current human resources are too few to solve urgent climate-related challenges without the exponential power of AI,” Microsoft’s chief environmental officer, Lucas Joppa, said.