How ISPs will tempt you in the NBN era 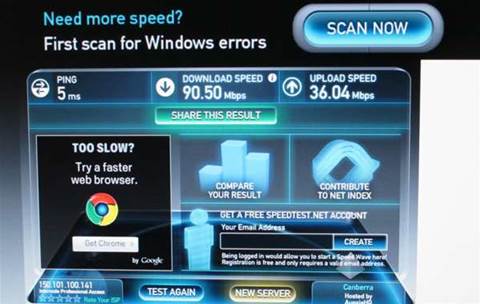 With the first NBN retail pricing available, service providers now have to convince customers to stay with them or switch across from competitors in the move to fibre. Cameron Craig, director of plan comparison site WhistleOut, looks at the marketing tactics companies intend to use.

Optus has released its price plans for the NBN. Thankfully, we don't look like idiots for demonstrating that the prices are comparable to ADSL prices, and in many cases cheaper for what you actually get on a speed and per-gigabyte price.

Optus sits in the middle of the pack when compared to other competitors to date, just like they do in mobile phone plans.

Well, Optus has no choice other than to price its products in this way. It can't leave any money on the table when setting prices - it is a very big company with thousands of employees to feed and many millions of shareholders to deliver profits to.

However, Optus staff will always live by this one rule…"we can't be as expensive as Telstra". It was born into this market as a challenger to the incumbent and 20 years on, maintains that message.

In previous jobs I have seen plenty of beady-eyed executives ask me "are you sure that you're not leaving any money on the table with this price".

Optus' NBN pricing is in line with the telco's equivalent Naked ADSL plans but they aren't likely to stand out and win share in a commodotised broadband market on these prices alone.

It will need to do way more than that to make a compelling offer to customer, both existing and new.

Optus has millions of mobile phone customers to whom it can offer a bundle price on the basis of getting a bigger share of the customer’s wallet. Home phone line rental will be redundant on the NBN so all the bundling and loyalty discount pricing will be on mobile phones, internet protocll television (IPTV) and wireless broadband.

Ye olde home phone bundles, one of Telstra’s strongest features in the legacy ADSL world, will be irrelevant.

Thus far, Optus has undercut growing rival iiNet. It is not an accident. iiNet has been touting its number two position in ADSL and it would not be pleasant to see Optus move its pawns in the long game of NBN, by offering mobile phone plan bundle discounts.

But Optus won't be alone in this venture: the NBN is a long fight for competitors old and new and rivals are likely to use five key strategies for new broadband market share.

If you can offer exclusive content to your audience, you have got a compelling offer that people will pay a price premium for.

The NBN means reliable fast internet and TV quality streaming on demand (for real) and everyone will have boxes connected to their TV in an NBN world. Sitting on your couch and using a remote to 'show me a replay of my team's game' or 'show me just the goals scored in the latest game' and seamlessly jumping between tries is going to be compelling.

Telstra is already leading the way with its T-Box and exclusive content deals for full online replays of Australia's favourite sports (AFL and the NRL soon). If you love your footy, then Telstra has given itself a huge advantage in winning you as a customer in an NBN world. It is not seamless yet but by the end of the NBN rollout, it will be magical if you're a football fan.

The codes are playing ball here too, as pending litigation suggests.

However, as a consumer, exclusive content does not seem right to me. If I'm on Exetel and want to watch just one NRL game online once every month and I can't, I would feel slighted by the AFL or NRL for shutting me out and selling the rights to just one internet provider.

The ASP World Tour of Surfing live streams its many competitions over the web. A couple of hours later, every heat is available of replay online, where you jump instantly using your mouse to any of the scoring waves in the heat. Brilliant. It’s open to any internet user. Lock that away on one ISP and many will reluctantly follow it.

Vodafone has been participating in the NBN trials and will be a player in the fixed broadband market for the first time in Australia over the next few years. It already has exclusive rights to cricket for mobile phones, and would be nuts not to cover off all internet access rights for the future, giving it another of Australia's favourite sports for exclusive replays, on-demand highlights and specific games.

Locking the cricket streaming and online digital replays to an ISP would be another key customer ring fencing event.

When it starts to get traction here, IPTV will be huge. In the US, web video (mostly Netflix and YouTube) already accounts for 37 percent of Internet traffic volume. Australians don't have access to Netflix right now but by 2020, when we have access to similar services, you could easily imagine video and TV on demand could be well over 50 percent of the NBN use.

Services like the T-Box, FetchTV and other IPTV offerings will be a massive point of differentiation between service providers competing for customers. CNN, BBC, MTV all through the internet, directly to your TV. Right now, it is embryonic but will grow quickly when the NBN backbone is in place. Foxtel has to innovate as there is a lot of fat in the model now.

The strategic advantage for any ISP which also has a mobile phone subscriber base will be to bundle price and offer reduced prices on your broadband plan.

Standalone broadband providers will struggle to match these price points without margin pressure.

Those ISPs that can bundle can make a combined margin from a customer, whereas a standalone provider can only make a margin on the broadband plan and needs a price point that gives a margin to survive.

The 'triple play' strategy is all the rage with telcos globally at the moment but look forward to quadruple bundles in the future: mobile phone, broadband, wireless broadband, IPTV.

Another option for ISPs on the NBN (which many will be forced into) will be to simply go bargain basement and offer rock bottom prices, just as TPG / Dodo and others already do now, and then try to make money in other ways - think RyanAir charging for toilets on cheap plane tickets for broadband.

In an ADSL world, users have suffered on ultra cheap ISPs due to 'contention issues' where the sheer volume of people on the ISP means that the speed suffers as the ISP does not re-invest on getting more capacity.

The ACCC has already warned ISPs intended on going down the same path but initial pricing from Exetel and Dodo indicate bargain barrel pricing is certainly on its way, with the side effects as yet unknown.

Customer service, service quality and other incentives will be another differentiating feature on the NBN as ISPs vie for customers.

Optus has priced its NBN plans to protect its margin (Optus don't want to be bargain basement) but also issue competition to growing rival iiNet.

The second largest carrier has looked at its strengths - such as good market share in mobile phones - and come in cheaper if you bundle your mobile phone as they can spread the profit margin they recoup across the two products, while appearing cheaper than iiNet.

But the opportunity for charging a premium for greater service from staff and incentives such as Optus' recent partnership with Qantas Frequent Flyers continues to exist under the fibre network. Smaller providers Internode and iiNet have certainly based their respective marketing and product campaigns on it, and there is nothing to suggest this will change quickly.

The NBN is a long game, and if Telstra undercuts Optus in any way on NBN plans, expect a price update from Optus almost immediately.

You can compare all the NBN prices here on WhistleOut for each of the speeds.