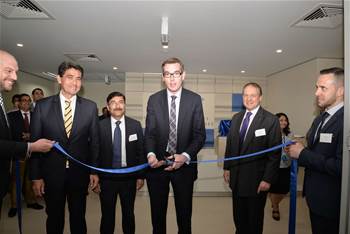 Come Monday, the SAP support, payroll, finance, HR and procurement functions that for years have been delivered to the NSW government by internal agency ServiceFirst will switch to a team of 80 new - and privately employed - operators.

Finance and Services Minister Dominic Perrottet today commemorated the opening of Infosys’ new ‘GovConnectNSW’ service centre in Parramatta, which the global outsourcing giant set up after winning a bid to take over the ServiceFirst work.

ServiceFirst was established as a shared services centre for a cluster of NSW agencies in 2008. In 2013, the Liberal state government revealed it was looking at options to outsource the operation to the private sector, and began taking bids in April 2014.

It has since picked an Infosys/Unisys pairing to take over the work for the next six years, in what it is calling a “hybrid” delivery model split 70:30 between onshore and offshore workers based in India.

Perrottet claims the state will save $13.4 million over the life of the deal, which will escalate to $19.5 million annually in subsequent years.

Government workers union the PSA has claimed that the the state originally intended to send 95 percent of the work offshore, but was talked down through PSA lobbying and staff strikes.

It also said it had managed to secure agreement for a voluntary redundancy swap scheme, where ServiceFirst staff can switch places with public sector colleagues in equivalent roles who are looking for a paid departure.

However less than half of ServiceFirst staff opted to stay in the government, with only 112 of 254 putting their hand up for redeployment.

“With a voluntary redundancy package on offer, a majority of staff preferred to take the package rather than seek redeployment.”

“For the minority who did seek redeployment, the outcome of the Mobility and Job Swap program has been very successful,” a DFSI spokesperson told iTnews.

Ultimately 63 staff were placed in new jobs in the government, and a handful of others have been re-hired by Unisys and Infosys.

The Infosys side of the GovConnect operation will be staffed nearly entirely by new employees picked up out of the Western Sydney catchment.

Infosys’ Australia and NZ head Andrew Groth confirmed to iTnews that hiring started essentially from scratch when the company won the work, with “not a big number” of staff transitioning over from the government - understood to be less than five.

Infosys has made roughly 60 local hires so far and has 80 staff on the books, with capacity to grow to 140 as new customers come on board.

Roughly 15 percent of the initial Parramatta workforce will be executives brought over from Infosys’ Indian base on 457 visas to embed Infosys business processes and share how to “deliver across multiple regions seamlessly”.

Infosys will deliver services to foundation clients the Department of Finance, Services and Innovation; Service NSW; the Department of Premier and Cabinet; the Public Service Commission; NSW Treasury; and the Independent Pricing and Regulatory Tribunal on an “as-a-service” basis.

“Rather than a asking for ‘x’ number of bodies to come and work on an IT project or something like that, the commercial arrangement focuses on a number of transactions or a number of people being paid, for example,” Groth said.

Unisys will take over the bulk of the IT support work once performed by ServiceFirst when it opens its own delivery centre in Rhodes early next year.

It is expected that around 20 former ServiceFirst staff will be re-hired by Unisys.

Minister Perrottet said outsourcing the work freed the state government to focus on the “core responsibilities of government” like infrastructure, health, transport and education.

He said it had been a “long, long road from our end to get here, but we did it”.

“It is important that we have gone down this path because it is the start of many things to come," he said.