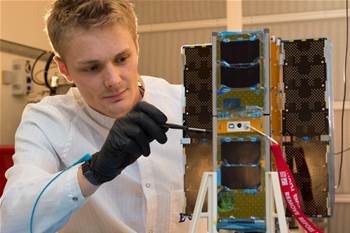 Five more have been funded.

The University of New South Wales Canberra has successfully launched its first CubeSat into orbit, currently testing the satellite ahead of its full operation next year.

Named Buccaneer, the miniature CubeSat was developed by UNSW Canberra and the Defence Science Technology Group, and was launched from the United States Air Force Vanderberg base in California.

Buccaneer will be used to calibrate Australia's Jindalee long-range over the horizon radar, and to predict the orbits of "space junk" and other objects flying over the Earth.

“Being able to avoid collisions in space is essential if we are to safeguard the space-based technologies upon which society depend," UNSW Canberra space director Professor Russell Boyce said in a statement.

"Our CubeSats will play an important role in gathering data for this research, among other outcomes such as demonstrating space-based capability ranging from remote sensing to ultra-secure quantum communications."

The UNSW Canberra CubeSat is the first of five funded satellites, and another three in development, in the university's flagship space program established with a $10 million internal investment.

Some 40 space engineers, scientists and PhD students work within the program.

Australia joined the international CubeSat QB50 project last year, along with 19 European countries as well as Canada and the United States.

Miniature single-unit CubeSats measure 100 x 100 x 113.5 millimetres and weigh no more than 1.33 kilograms. They can be combined into double and triple units.

A total of 36 CubeSats have been launched into orbit this year by the QB50 project for atmospheric research purposes, with Australia contributing three of the craft.