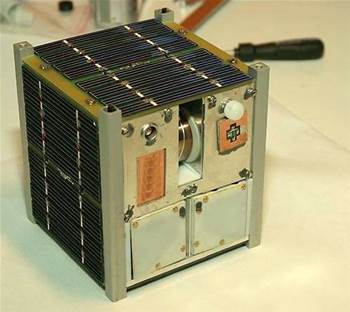 To be launched from the International Space Station in January.

The Aussie CubeSats will be launched from the International Space Station (ISS) as part of the QB50 project, coordinated by Belgium's Von Karmen Institute for Fluid Dynamics research institution.

Australia's three CubeSats will be built by teams at the universities of Sydney, New South Wales and Adelaide. They will be named i-INSPIRE II, UNSW-EC0 and SUSat respectively.

The QB50 project is funded by the European Union and involves 50 CubeSats from 19 European countries, 10 from the United States, two from Canada, three from Japan, one from Brazil, and the remainder from other countries around the world such as China.

The satellites were to be launched in February this year aboard the Brazilian-Ukrainian Cyclone 4 rocket. However, the Cyclone 4 project went under after Russia invaded the Crimean Peninsula, causing major destabilisation in Ukraine.

QB50 has now set the launch date of January 2017 in conjunction with US company Nanoracks.

CubeSats are miniaturised satellites measuring 100 by 100 by 113.5 millimetres, weighing no more than 1.33 kilograms per single-unit craft. The QB50 project will use larger double and triple unit CubeSats.

They circle the earth at 400 kilometres above ground and have a life-span of two years.

Classed as pico-satellites, CubeSats are inexpensive to make at around US$50,000 each, and can use cold gas, chemical, and electric propulsion for navigation, along with solar sails.

They were developed by the California Polytechnic State University and Stanford University for academic space research and observation projects, and also for commercial and amateur use.

The United States National Aeronautics and Space Administration government agency is currently working on a CubeSat initiative that will see 50 satellites from each of the country's 50 states launched into space.

NASA is also offering free rides for CubeSat launches as part of the initiative.