'Everything back to normal', says BigPond 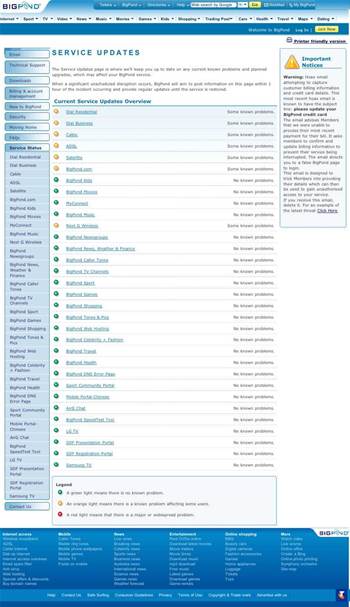 Telstra's BigPond internet service provider is back online and "everything is back to normal", a spokesman said today.

Telstra spokesman Martin Barr told iTnews that the incidents that caused widespread disruptions across BigPond's network since Monday were resolved and other outages experienced today were "scheduled maintenance and advice to customers".

BigPond was brought to its knees following a server failure on Monday. Telstra would not reveal the circumstances of the server or how its failure defeated its disaster recorvery and redundant systems that disrupted customers receiving their emails.

iTnews readers have reported they were unable to receive emails or access Telstra's help desk.

Reader Ken Hargreaves, who was planning an overseas trip, said yesterday he was yet to receive hotel booking confirmations.

"Now I am annoyed status [page] says problem fixed but emails that were sent have not been recieved," Hargreaves posted to iTnews forums.

"The help desk originally started by telling me to reset my account as if I wasn't receiving them at all," he told iTnews today.

"I then persisted and then asked for a supervisor who took the details and said they would escalate it, however it could be four business days as a
set standard, but that they would look at it as a priority but they probably tell everyone that."

Hargreaves put his chances at getting the emails based on his help desk interaction at about 50-50.

Telstra's widespread problems with user login and email on its BigPond internet and Foxtel cable services defied the telco's early confidence that it could defeat the gremlins in its system swiftly.

Barr told iTnews at the time that emails were safe and would be forwarded once the problems were fixed.

Although it apologised throughout the week for the problems that paralysed its customers, Telstra said it would not circulate an incident report explaining the outage.

Is your Big Pond service back up and running? Let us know if you got all your emails, as Telstra promised.