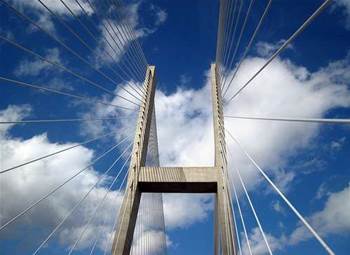 To be tapped by researchers and industry.

Three key research centres and a consortium of Internet companies will work together on a European cloud computing platform.

A statement from CERN, the Geneva-based particle physics organisation, said the platform -- dubbed "Helix Nebula-the Science Cloud" -- would be made available to government bodies and industry after a two-year pilot phase.

Also participating in the programme are the European Space Agency (ESA) and the German-based European Molecular Biology Laboratory (EMBL), which like CERN are gathering vast volumes of information that cannot presently be processed.

"This pan-European partnership across academia and industry ... will foster innovation for science and create new commercial markets," said CERN, where the World-Wide Web was created in the early 1990s.

But the three research bodies will initially use Helix Nebula to boost processing of data from their own operations -- at CERN in the search for the Higgs boson, which is believed to have given mass to matter at the dawn of the universe.

Cloud computing centralises data and applications in remote -- usually commercial -- computer banks rather than onsite in institutions, companies and homes, and allows the sharing of processing and data storage.

Information technology specialists say it also turns computing power from a commodity, that may or may not be used to the full by a single user, into a service users can draw -- and pay for -- only what they need over the Internet.

At CERN, tens of thousands of computer disks recording particle collisions in its Large Hadron Collider (LHC), which is also probing into cosmic mysteries like dark matter and super-symmetry, need to be analysed monthly.

"We see Helix-Nebula as a great way of working with industry to meet this challenge," said the centre's IT chief Frederic Hemmer. CERN is about to increase the power of its LHC, which will quadruple the data it produces.

EMBL is setting up a new service to ease the analysis of large genomes, like those from mammals, in a programme focused on achieving greater insight into evolution and biodiversity across a range of organisms.

"The quantities of genomic-sequence data are vast, and the need for high-performance computing infrastructures and bio-informatics expertise to analyse it poses a challenge for many laboratories," said Rupert Lueck of the EMBL IT centre in Heidelberg.

The Paris-based ESA is working with national space research bodies in France and Germany and Italy's National Research Council to set up an Earth observation platform to focus on earthquake and volcano research.

Officials there said the new cloud platform would enable the agency and its partners to analyse promptly data from ESA satellites.

(Reporting by Robert Evans; Editing by Will Waterman)