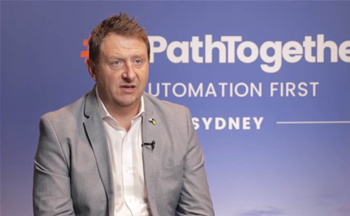 Aims to cut time out of recruitment process.

“As an organisation with over 50,000 people, our main ability is to get people into the workforce and delivering service for customers,” Townrow said.

“That can take a long time depending on customer requirements - anything from 30-60-90 days from a person applying for a role to putting them on the ground and working.

“We're seeing some huge opportunity at the moment just by turning around simple parts of that process and doing it in fractions of time.

“It improves the employees' experience of them onboarding and working within the business, but then also delivers a rapid service to our customers.”

Townrow said that Downer Group would spend the next year on “a big piece of work” deploying RPA into this part of the business.

One of the opportunities is to reduce administration efforts on the part of recruiters, freeing them up to focus on actually making the new hires.

“At any given time, we have typically around about 2000 local vacancies in the business and up to 50 recruiters,” Townrow said.

“By looking at that recruiter pool and what they're doing, they're spending around 50 percent of their time purely doing admin tasks, so we're working with them now to understand [that].”

He said that Downer is also working with UiPath on some specific proof-of-concepts (PoCs) for recruitment, though he did not detail their exact nature.

Improving the ability of recruiters to find and hire talent quickly had “a knock-on effect” for Downer’s business.

“It means that we can then provide the services to our customers that they need [faster],” Townrow said.

Townrow said Downer had worked with UiPath for about two years already implementing RPA technology in other parts of the business.

“We started in the backoffice of shared services where we had some real challenges with legacy systems,” he said.

“Now, we're moving into more of [the] customer-facing operational work that we do.”

RPA, he said, had proven its value as a tool and “precision instrument” available in Downer’s “improvement toolkit”.

“You've really got to put it within a continuous improvement team,” he said.

“By having that knowledge about your processes, and applying some of the basic rules around what to automate and what not to automate, you can very quickly identify the low hanging fruit and go for that.”

Townrow said in a separate video that RPA was also helping Downer “on [its] journey into artificial intelligence”.

Downer Group recently closed off a new round of recruitment advertisements that suggested an expansion of its internal capabilities around RPA, automation and machine learning.

It had sought both automation analysts and developers to put together business cases and technical solutions to meet them.

The company suggested it was using “RPA technologies such as UiPath, Automation Anywhere, Blue Prism and others”.