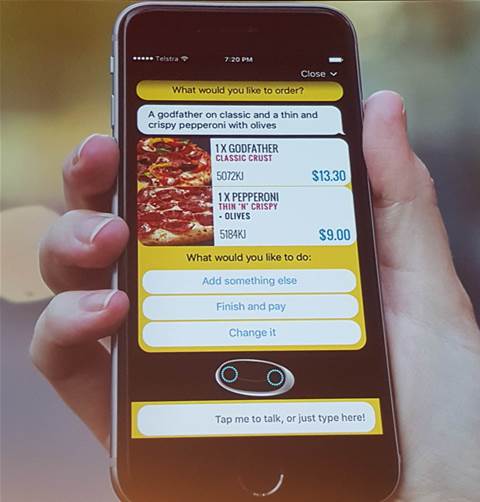 Pizza giant Domino’s has teamed up with natural language firm Nuance to create a virtual assistant for ordering pizzas.

In an expansion of its DRU (Domino's robotic unit) automation platform, DRU Assist will allow customers to make orders via voice, using natural language technology to process orders through the mobile app, and through text-based chat on the Domino’s website.

It will allow consumers to customise their pizza, change their order, select their chosen store and time for pick up, and pay for their order.

She said Domino’s was planning on extending the platform to third parties like Amazon’s Alexa-enabled Echo speaker when such devices come to Australia.

“If you’re at home and don’t want to take out your phone and [want to] just say ‘I want pizza now DRU', that’s where we see this going," she said.

However, Cummings warned that it would take some time for DRU Assist to become fully functional.

“Every interaction our customers have with DRU will help him train and learn. He’s the newest member of our team so he will need a bit of time to learn all about our menu, and all the different addresses people want to get their pizza delivered to,” Cummings said.

The pizza giant said it would develop “nearly all of our platforms to engage with AI and machine learning” from this year on.

“This is really big,” Meij said.

“In our belief, this is platform change.”

The pizza chain also said it would release a bot for Facebook Messenger “in the coming days”.

The bot will allow customers to access deals from their local Domino’s store. It will not process orders.

“[We found] that the second thing our customers are most interested in are vouchers and deals,” chief digital officer Michael Gillespie said.

“The bot ... lets you go into Facebook Messenger, talk to Domino’s like it is one of your friends, and simply ask for a deal, tell it what store you’re after, what service method [pick-up or delivery], and the bot will give you deals for your local store.

“It adds a new-found level of convenience for people to stay in an environment they love … and communicate with us, a brand, with AI and get a great deal.”