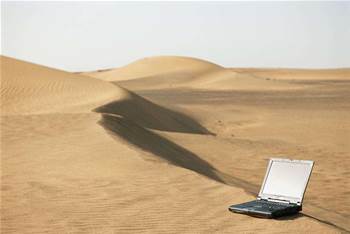 Too big a secret to tell the Feds about.

CSIRO will invest up to $30 million to develop two mystery wireless solutions for regional Australia designed to trump 4G, WiMax and satellite alternatives.

The research organisation said it had "resourced" the project with $6 million per year over a three-to-five year period.

But internal funding could be extended further if suitable industry partners can't also be found.

It said the wireless regional access solution could deliver broadband services at 100Mbps "to sparsely populated areas at significantly lower costs than WiMax or 4G".

The speed claim is far higher than what current wireless technologies are capable of delivering.

CSIRO also said it was developing a microwave backhaul product capable of transmitting up to 10Gbps over a distance of 50 kilometres.

It had prototyped a 6Gbps version capable of shorter range transmission, but CSIRO believed that concept was scalable.

The technology was positioned as a way of extending fibre backhaul links into towns that would otherwise miss out on the high bandwidth infrastructure.

But CSIRO ICT centre director Alex Zelinsky told a public hearing of the NBN Senate Select Committee in Sydney that the organisation had considered it too early to share details with the Government prior to its formal submission last month.

He faced a grilling from several Senators over whether CSIRO could have provided earlier warning of the technology advances to the Department of Broadband, Communications and the Digital Economy (DBCDE).

Earlier warning, it was argued, could have enabled the technologies to be incorporated more tightly into the NBN planning process.

"The patents [for the wireless technologies] have only recently been filed," said James Moody, executive director of development at CSIRO.

"It's only now we've actually gotten to a point where we have something that is potentially of value [to the NBN and DBCDE]".

"The work we've done to date hasn't been in the public space," Zelinsky said.

"We're in the business of creating new technology options but there's always a risk with research and innovation that sometimes it doesn't always deliver what it was intended to."

Zelinsky said the technology was still in a "lab stage. We're still a way off from actually deploying it," he said.

Consequently, discussions between the CSIRO and DBCDE had been in the context of a "broader engagement around the broadband space".

"Most of our conversations with the Department aren't just about this one technology," Moody said.

"We believe the technology is just one more option but of course it needs more development."

CSIRO was seeking industry partners "to help us further develop the [wireless] concepts", Moody said. These partnerships were "much more than funding", he said.

"It may be that if we can't secure a partnership in this space, we'll look to our own resources. But that‘s to be decided down the track," Zelinsky added.

The Senate Committee had sought assurances from CSIRO that, given the technology's potential to boost broadband penetration in underserved areas, its development to commercialisation was suitably funded.