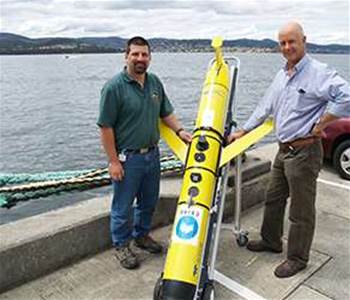 Australia's peak science body the CSIRO has announced plans to deploy a custom-built, robotic 'glider' to investigate the impact of Queensland's recent floods on marine ecosystems in Moreton Bay.

Commissioned in January 2010, the $200,000, torpedo-shaped device was about two metres long and used differences in water density to 'glide' across the water.

It had around 14 sensors to measure light, oxygen, temperature, salinity, nutrients, organic matter and phytoplankton - data that could be used to generate three-dimensional maps of the flood plume and its effect on marine flora and fauna.

The glider was delivered to the CSIRO by oceanographic instrument manufacturer Teledyne Webb in September 2010 and underwent its maiden voyage in Tasmania in December.

Although the glider had enough battery power to operate continuously for a month, the Tasmanian trial was concluded in a week due to a software glitch.

Thompson told iTnews that the glitch had been addressed ahead of the week-long Queensland operation.

In Moreton Bay, the glider would follow a pre-programmed route, travelling as close to the Brisbane River as possible - shallowly near the shore, and deeper underwater further offshore.

It would communicate with the research team via the Iridium satellite network whenever it surfaced, which could be around 12 times a day.

A typical 100-metre dive with a sampling rate of one Hertz generated "megabytes" of data per upload, Thompson said.

The data would provide a sub-surface view to complement NASA's MODIS satellite data. Researchers expected the project to contribute to better oceanographic models that could be used in future floods.

CSIRO's 'Our Resilient Coastal Australia' theme leader Andy Steven said the recent flood - said to be the worst since 1973 - was a "rare opportunity to understand how our marine ecosystems respond to massive inputs of fresh water and sediments".

"What we might expect to see is ... the high sediment loads smothering and reducing the light environment available to photosynthetic organisms like coral and seagrass," Steven said.

"We might also expect to see some knock-on effects because seagrass is so important to dugong and turtle [species].

"We may also see, once the sediment starts to settle, further phytoplankton bloom within Moreton Bay," he said.

Queensland's IT community pulled together to address the effects last week's flooding, which caused damage to AAPT, AARNet, Nextgen and Telstra assets.

Earlier this week, technology companies began refurbishing donated PCs and servers to get affected small businesses, schools and community organisations get back on their feet.