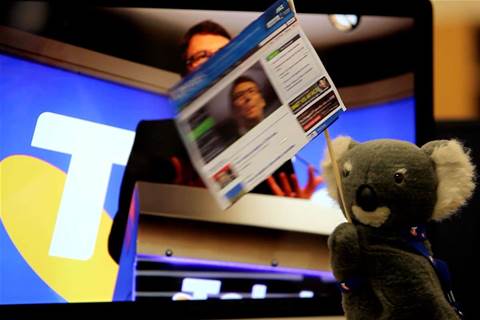 Earlier this month Telstra launched Cabbioke, a marketing initiative designed to change the company's stuffy image - by offering free taxi rides to people who sing karaoke during their trip.

According to Telstra, Cabbioke will make people "take another look at our brand, to change their perceptions of it and cast it in a contemporary, more dynamic light."

The Crunch interprets this corporate speak to mean that your money is no longer good enough. From now on Telstra wants you to suffer and feel actual pain.

It's not only Telstra assaulting its customer's ears. The Crunch has proof that companies including Intel, Symantec and Motorola are guilty of exactly the same crime.

At the Internet Industry Association dinner last week, the entertainment - and I use the term loosely - was provided by Big Kahuna, a band made up of high ranking techie execs and fronted by Phil Cronin, the general manager of Intel's APAC operations.

Now I'm not saying Big Kahuna were good because they weren't. However, compared to Cabbioke, these guys might well become the next Bjorn Again!

Telstra, the Crunch wants to lay down the gauntlet. If you really want to be cool then stop poking fun at drunk people and get David Thodey to join a rock band. If your CEO does a live gig and lets us film it, we pledge that instead of referring to Telstra in our stories as "the incumbent telco", we will call it 'the coolest telco in Australia'.

The ball is in your court, Telstra.