Crunch: Telepresence and the end of the world 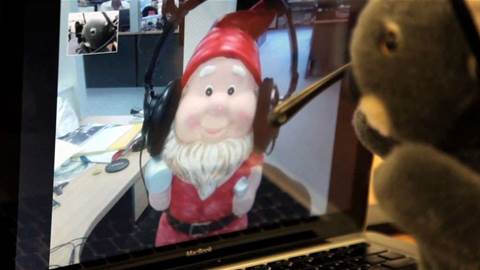 Sydney gets telepresence but with CERN ramping up the LHC, Coco doesn't believe anybody will be around to use it.

Public telepresence has arrived in Sydney at the Sheraton on the Park hotel.

Telepresence is a virtual meeting room where people in different geographic locations can sit around what looks like the same table and have a chat without technology getting in the way.

No need for clumsy webcams or uncomfortable headsets.

All the telepresence rooms are designed in a similar fashion, with huge flatscreens, discrete cameras and microphones, so when you are sitting at the chair it is very easy to forget that the person opposite you could be in another continent.

To demonstrate the system, we held a conference between Sydney, Singapore, Paris, Chicago and Santa Clara.

There were six people in the Singapore room and the screen flicks to the person speaking seconds after their microphone picks up a voice. It takes a little getting used to but after a few minutes, the different speakers appearing on the screen seems very natural.

One thing the Crunch couldn't get used to was not being able to make eye contact at someone because they may look like they are staring right at you but they are probably looking at someone thousands of kilometres away.

The service costs $500 an hour and currently there are about 3500 Telepresence rooms around the world but only a handful are open to the public.

So unless you want to speak to someone who has access to a telepresence room, it's probably best to stick with good, old-fashioned Skype.

And check out CRN's slide show for a view of how telepresence and video conferencing has evolved in the past 131 years including AT&T's 1964 attempt at calling booths that were removed within four years.

End of the world

The Crunch is in a bad way this week. What's the point of.. well, anything? Two things have driven the Crunch to feelings of, melancholy sandwiched between doom and destruction.

Firstly, we watched an eight year old TED talk by Stephen Petranek, where he talks about ten ways the world might end. Apart from comets, Aliens and other likely events, he also talks about a particle accelerator mishap. [the full TED.com talk by Petranek, which is well worth watching, is embedded at the end of this story].

Well eight years later and $10bn poorer, scientists have realised Petranek's worst nightmare and created the biggest atom-smasher ever. Until now the LHC has been running at idling speed, which has still been enough to blow away the previous world record for particle collisions. This week, scientists at CERN have warned they will be cranking up the power and taking those collisions to a whole new level.

Now the Crunch isn't really sure what a TeV is but we are convinced that making explosions with 7 or 14 of them could be trouble.

So take our advice. shut down your computer and go drink responsibly with your friends in the pub - for the next week. It might be the last drink any of us ever have.