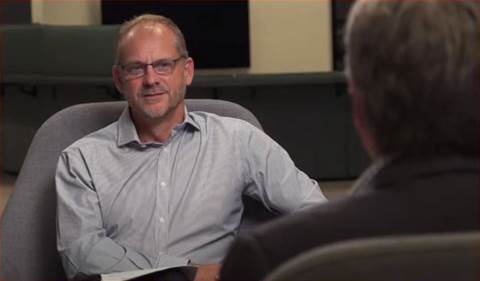 The Commonwealth Bank of Australia’s highly regarded chief technology officer Matt Pancino has been poached by Google to become its Asia Pacific director of “industry solutions” with the straight-talking executive taking a pot-shot at the corporate cult of hot-desking while on “gardening leave”.

Pancino's departure from CBA was revealed by iTnews in March, though at the time Google was remaining tight-lipped about the star hire.

The news of Pancino’s move broke cover as he answered questions during an Australian Computer Society webinar this month, where the seasoned bank transformation leader cautioned that the successful mass adoption of collaboration tools and remote working could yet redefine the ultimate corporate power statement – the office.

Having watched the corporate buzzword peddlers gradually raid and disfigure the legitimate lexicon of developers and infrastructure teams – like the blanket linguistic abuse of ‘agile’ and ‘new ways of working’ – IT hard heads like Pancino are warning the post-agile, corona-safe workplace will likely be very, very different from a space, property and physical perspective.

“The outlook for how teams work together in collaboration from an agile perspective is, hopefully, really, really bright. The reason why I say that is the mass adoption of collaboration tools that remote working has forced is quite astounding,” Pancino said.

“As we come out of this phase, hopefully we won't lose many of those practices. And then you think about what that means as people gradually come back into the office, and of course, it's going to be difficult working out how to navigate lifts and all of these kinds of things. You know, I think, ultimately, I'll be a bit controversial, I think a hot desking, hopefully, will be dead.”

There is of course a pre-existing tension between many corporate technology, property and human resources practices, with many senior technologists more than a little wary of corporate floorplate planners using hotdesking, agile teams and ‘breakout areas’ as cover for asset sweating.

Switching to hotdesking does give corporates a sizeable saving on seats, usually around 30 percent over traditional cube farms or pod layouts, hence the zeal to embrace allegedly agile culture on the work floor.

Pancino says that while the real estate argument of “you only need seven desks for 10 people” is a valid one in terms of optimisation of space, the actual value of co-locating teams is a bit harder to enumerate.

“It's very hard to measure the benefits of actually having true agile teams co-located, collaborating with a good and healthy culture,” Pancino said.

“The good news out of all of this, hopefully, is now we've been able to demonstrate that we're able to work productively working from home. As we come back into the office, we can still meet the financial metrics that the real estate teams have always yearned for, you'll need less real estate for the number of people you have.”

Pancino said that hopefully, people could “return to a particular pod or a particular location to get the benefits of that social collaboration” that made them useful and productive “and you'll have a COVID-safe environment, and you'll have better adoption of the collaboration tools, through the very fact that remote working has been forced upon us in the first place.”

There was now a “tremendous opportunity for organisations to be even more productive than they were before” because employees could have much more flexible working conditions, Pancino said.

Put more bluntly, the massive open offices and spaces that banks and their technology providers have collectively spent billions designing could be headed for some downsizing as people need more space, rather than less space with less physical movement and interaction.

Pancino has a massively valid point too, given so many newer office fit-outs feature lots of small rooms where social distancing is simply impossible. Those rooms are, for the time being, essentially redundant for anyone but single users.

“I think the penny's dropped, I've read many articles in the paper in the last couple of weeks predicting that maybe companies don't need these massive edifice buildings in CBD locations that people have to commute an hour from the [NSW] Central Coast to … moving forward, maybe, those days are behind us,” Pancino said.

His take does raise a few curly questions for both CBA, which has made a bet big on its purposely built-for-agile Eveleigh digs in Sydney as well as newer open buildings in Darling Harbour on the site of what was once Sega World.

Thus, a brutally logical question arises. We know that Google can put a monorail into an office building through a window: but can it take one out?

Possibly not the infrastructure challenge Matt Pancino imagined when he signed on with Google, but hey, these are very different times.