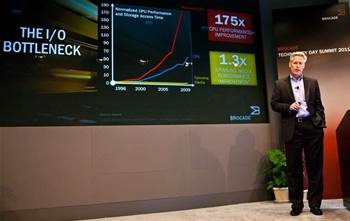 Michael Howard, principal analyst at Infonetics explained that the big difference between vBlock and CloudPlex is that Brocade’s offering was based on open standards, which could see numerous other vendors create their own version of the product.

“Cisco’s vBlock is a nice solution and it makes it easy to buy a unit of a data centre," he said.

"Brocade take the position that adhering to open standards allows its customers to mix and match any of the compute, storage and [Brocade] network elements so the customer can chose any server and any storage that adhere to this open stack principle.

"So it is much more flexible and you don’t have vendor lock-in - except the Brocade networking,” Howard told iTnews.

Brocade CEO Mike Klayko told iTnews that a standards-based approach meant Brocade’s technology was  “widely adopted and it allows us to plan a much larger market.

“When we get a chance to get in front of a CIO and present out kit, we usually win,” he said. “I’m in pretty much everybody’s data centre - they just don’t know it.”

Howard predicted that Dell would be among the vendors to announce products based on CloudPlex.

“Brocade has ... hinted that Dell will have its own version, which will include Dell servers and probably Dell storage as well. I suspect we might see other combinations, not just Dell, where you can order this solution,” Howard said.

Dell and Brocade have been close partners for over a decade and the former has been rebranding Brocade products for many years.

A message from Dell’s CIO Robin Johnson was played to attendees during the opening session of Brocade’s annual Tech Day conference in San Jose, California.

He revealed that Dell is deploying Brocade’s new switches throughout its global operations.

“We are rolling out PowerConnect [the Dell-branded Brocade switch] throughout all our call centres, data centres, factories and everywhere we do LAN switching,” Johnson said.

“Six months into the program and we are seeing great results -- 40 percent cost reductions from our previous technology provider.”

The compute stack was one of two major announcements at Brocade's Tech Day event.

Brocade also announced that it has doubled the speed of its Fibre Channel product range to 16 Gbps, which when combined with its latest 384 port DCX 8510 SAN chassis allows data throughput of 8.2 Tbps. 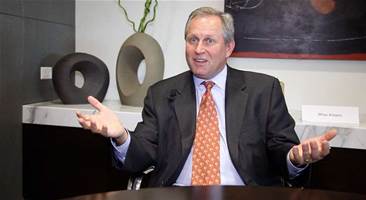 “There are 15 billion devices connected to the internet, the amount of traffic on video alone is going to grow 700 percent in the next three years.  To put that into perspective, that is the equivalent of producing 16 billion DVDs of new information every month," Klayko said.

"No networks, no data centres were ever designed for this growth".

Jason Nolet, vice president of data centre and enterprise networking at Brocade revealed that at maximum capacity the system would use 0.2 watts of power per gigabit of throughput, which he described as “shockingly low”.

Not all about feeds and speeds

Vanessa Alvares, analyst for infrastructure and operations at Forrester Research told iTnews that whilst the technology update was impressive, scalability and performance were far less critical than other business requirements a CIO needs to consider.

Raman Sud, director of network operations at US-based co-location access provider PhoenixNAP said he initiated a migration from Cisco to Brocade because of power consumption rather than raw speed or standards.

“Once you are building cloud infrastructure and you want to go to different data centres around the country, the biggest issue I have noticed is that as far as high density data centres go, [power constraints] mean you may not be able to deploy your gear. Brocade gives us flexibility on the power side - I could just get standard 30 amp circuits and fire up my whole stack, that was a big deal.”

Is there still a future for Fibre Channel? Read on for iTnews' analysis....