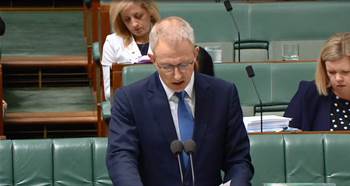 The federal government has reintroduced long-delayed legislation for a broadband tax on non-NBN operated fixed line services, which it hopes will be in place from 1 July 2020.

Communications Minister Paul Fletcher reintroduced the Telecommunications (Regional Broadband Scheme) Charge Bill 2019 “without notice” in parliament this morning after the government’s former bill automatically lapsed at the close of the last parliament in April.

The bill, which was introduced alongside another complementary bill to establish NBN Co as the new default fixed-line operator in Australia, will see residential and business users of "NBN-equivalent" fixed line services hit with a monthly fee of $7.10.

The proceeds of the tax would be used by NBN Co to fund future costs of commercially unviable portions of its network - the satellite and fixed wireless footprints - and prevent future calls on the budget or public funds.

However, it has long been unclear the extent to which the tax would fulfil this.

NBN users are not be expected to pay the tax because it is already built into the wholesale price they pay, meaning very few internet users will wind up paying it.

“The money collected from the base component of the charge would be used to fund the losses NBN Co incurs in constructing and operating its fixed wireless and satellite networks, replacing the company’s opaque internal cross-subsidy from its fixed line networks,” Fletcher repeated on Thursday.

Another complicating factor is the future sale of the NBN. If NBN Co is broken up and sold off in pieces, it is likely that the uneconomic portions would remain in government hands, making it much more difficult to rely solely on the tax to fund upgrades.

Additionally, the Australian Competition and Consumer Commission (ACCC) and Australian Communications and Media Authority (ACMA) are in line to receive a small portion of the tax funds to cover enforcement costs.

The agencies would provide advice to the Communications Minister on the scheme every five years.

A cap on the tax amount was reduced from $10 to $7.10 in the April federal budget to meet a condition of Labor’s support for the bill, which was first proposed in December 2016 and introduced to parliament in mid-2017.

The budget also introduced a “five-year exemption from the [tax] for the first 55,000 greenfield premises activated on certain carriers’ networks”.

“Minor changes have been made to the operation of the regional broadband scheme in line with proposals tabled in the Senate by the opposition that the government announced it would support at the time of the budget last April,” Fletcher said

“These changes provide greater certainty to telecommunications carriers and further ease the burden of transition to the scheme for smaller carriers.”

While the government originally hoped to have both introduced and passed the by the end of this year, Fletcher said it was now expected to be in place on 1 July 2020, if it is passed sometime this financial year.

“[The bill] would impose from the first July after passage a monthly charge on carriers in relation to each premises connected to their network that has an active fixed line superfast broadband during the month,” he said.

“If the bill is passed during the 2019-20 financial year, the proposed charge, which is a tax for constitutional purposes, would commence from 1 July 2020.”

The bill, along with the complementary Telecommunications Legislation Amendment (Competition and Consumer) Bill 2019, is expected to “underpin the ongoing availability of essential broadband services to all areas of Australia, particularly rural and regional Australia”.

Fletcher said the bills would “provide a transparent and fair funding mechanism that supports the long-term operation of NBN Co’s loss-making fixed wireless and satellite networks into the future”.

Debate on both bills was adjourned.