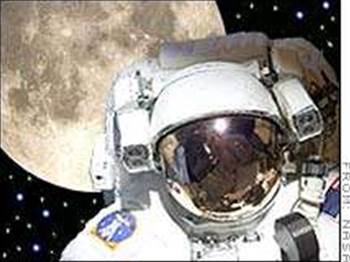 'It's going to cost you guv, some right cowboy put this in'.

British astronaut Nicholas Patrick has arrived at the International Space Station on a mission to repair the wiring and install a new power module.

Patrick, who was educated at Harrow and Cambridge, is on his first Shuttle mission and will operate the robotic arm used to check the outside of the shuttle for launch damage and install a new power module on the Space Station.

The Shuttle is also delivering food, computer equipment and Christmas presents to the Space Station crew.

"I was in the office when I got a call from the secretary of the chief of the Astronaut Office," said Patrick.

"My first reaction was 'have I done something wrong?' Fortunately that turned out not to be the case."

The rewiring of the Space Station and the new power module aim to significantly boost output from the existing solar cells, and form the platform for more power generation units to be added.

The Shuttle mission is one of the most complex ever attempted, as the Space Station's temporary power grid has to be completely shut down to allow the new module to be fitted. If all goes well the crew will land on 21 December.

Got a news tip for our journalists? Share it with us anonymously here.
Copyright ©v3.co.uk
Tags:
blastsbritishoddwareoffrepairmanspacestationto