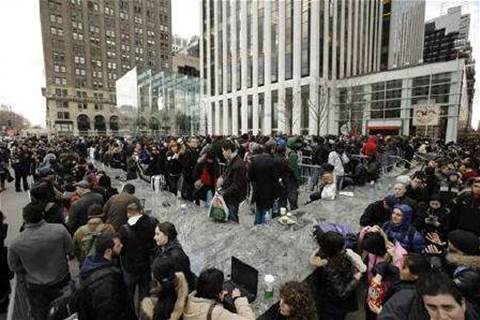 Thousands of people thronged Apple stores on both US coasts as the iPad 2 went on sale on Friday, signaling a strong appetite for a device that dominates the fledgling market it created.

Hordes of fans -- some of whom had queued up overnight -- formed raucous pre-sale lines, and attracted curious onlookers, in the chilly rain in Manhattan, and in San Francisco.

The crowds erupted as a sea of blue-shirted Apple staff threw open the doors at 5 p.m. and gave high-fives to the first iPad shoppers in Manhattan and San Francisco.

The turnout underscores how demand for Apple's tablet remains strong nearly a year after the original proved a smash hit, single-handedly creating the tablet market, and inspiring a wave of imitators from Motorola to Research in Motion.

More than 800 queued outside the Apple store on Manhattan's Fifth Avenue ahead of the launch, hoping to be among the first to get the thinner, lighter and faster iPad that Chief Executive Steve Jobs unveiled last week to strong reviews.

"I wanted to be a part of it," said Andrew Christian, 26, a pharmacy technician from the Bronx who was No. 11 in line after waiting all night in the rain.

He lined his sneakers with plastic Apple bags.

Wall Street anticipates a strong start to the iPad 2, on par with the original iPad, though some analysts were more bullish. Ticonderoga Securities' Brian White said Apple could potentially sell 1 million iPads over the weekend -- roughly matching sales in their first month on the market in 2010.

"It looks to me like it's going to be a very strong launch," he said.

Andrew Lee and his wife got to the store at 4 a.m. and each bought two iPads -- the maximum allowed.

"One for me, one for my wife, one for each of our kids," Lee said as he gamely posed for a picture from the crowd of swarming photographers.

The lines were in themselves a spectacle. More than 100 onlookers gathered just to watch the activity outside the store in Manhattan.

"It's curious to see how people can get so fanatic. It's interesting. I don't know whether it's good or not," mused Giordano Cioni, 23, who is on vacation.

Wal-Mart spokesman Ravi Jariwala said the world's largest retailer expected to sell every iPad it can get from Apple, from about 2,300 stores across the country. Best Buy spokeswoman Paula Baldwin said some of its outlets ran out of the tablet and its accessories within 10 minutes.

Analysts say the 10-inch touchscreen iPad 2 has been improved incrementally, not reinvented wholesale. It is thinner, faster and adds a pair of cameras for video chat.

Like its predecessor, the iPad 2's main chip is designed by Apple. The iPad 2 also includes chips from Broadcom and Texas Instruments, as well as flash memory from Toshiba, according to an analysis by iFixit, a company which provides repair services for Apple products.

Given that the iPad 2 will be available in far more stores to start than the original model, Wall Street would be surprised if the device fails to outpace its predecessor in the early going.

In addition to being sold at more than 200 Apple outlets in the United States, the iPad 2 was available starting on Friday in the stores of AT&T and Verizon Wireless, as well as Best Buy, Target and Wal-Mart Stores.

Unlike last year, Apple did not take orders ahead of the release, so anyone wanting to be among the first to get the new iPad will have to journey to a store. That may help bulk up store lines, providing Apple the buzz it craves and is expert at generating.

That buzz may prove important as rivals gear up for their own full-blown assault on the same market.

Tablet sales are expected to surge to more than 50 million units this year, with Apple capturing more than 70 percent of the market. The iPad 2 hits store shelves in more than two dozen additional countries on March 25.

Apple is releasing the second version of the iPad before many of its rivals have even brought their first tablets to market. Apple sold 15 million iPads last year, generating US$9.5 billion in sales, and had the tablet market largely to itself.

JPMorgan analyst Mark Moskowitz warned this week of a potential bubble forming in the market as early as this year, as Apple's rivals make more tablets than consumers will buy.

Blackberry maker RIM and Hewlett-Packard are set to release tablets in coming months. Some analysts believe RIM and HP could provide Apple with some competition, because both devices offer unique software, and both have formidable sales channels.

And although Samsung Electronics and Motorola have launched tablets, neither appears to poised to give the iPad a run for its money.