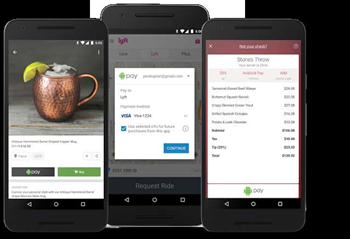 Still no deal with Apple.

Five of Australia's biggest banks have signed up with Google's Android Pay payments service as they continue to butt heads with Apple over Cupertino's own Apple Pay platform.

ANZ Bank, Westpac, ING Direct, Macquarie Bank, St George, Bank of Melbourne, Bank of South Australia and Bendigo Bank will all support the Android payment service when it lands in Australia in the first half of next year.

At launch, Android Pay will support Mastercard and Visa credit and debit cards, Google said in a blog post today. The company is currently "working with Eftpos" on similar support.

Missing from the list is the Commonwealth Bank, which already offers a mobile wallet that can be used on any Android phone to make payments.

A spokesperson said CBA welcomed the arrival of Android Pay in Australia.

"We have also recently enabled our customers to store their favourite store loyalty cards in our CommBank app.

"We are continually adding new features and services to the CommBank app and as we have always done, we will announce any future enhancements when they are ready for customers."

Rival big four bank NAB is also not listed as an initial Android Pay partner. It declined to comment.

Several of the banks signed up to Android Pay have existing mobile wallet offerings - Westpac's digital wallet can be used to make payments via specific Samsung Android phones, and ANZ is planning to launch its long-awaited digital wallet next year.

Android Pay will be also be available at retailers who accept contactless payments.

Initially, the likes of 7-Eleven, Coles, Crust Gourmet Pizza, Domino's, Donut King, Gloria Jean's, McDonalds, Telstra and Michel's Patisserie are among those signed up to Android Pay at launch.

“Australians are already the highest users of contactless payments in the world and given the dominance of Android in the local smartphone market, it made sense for us to partner with Google on the introduction of Android Pay into Australia," ANZ Bank products boss Matt Boss said in a statement.

The local Android Pay deals make Australia the second country behind the US to welcome the mobile payment service.

Apple recently announced a partnership with American Express to bring Apple Pay to Australia, but has not yet managed to get any of the country's banks to sign up to the service.

Negotiations have been underway since the payments service was announced last year, but banks are holding back over the cut of transaction fees Apple is pushing for.

It is understood Apple wants around $0.15 of the $0.83 interchange fees banks get for every $100 worth of transactions they process on customer Visa or Mastercards, similar to what Apple gets in the US.

But interchange fees in the US are much higher, Australia's banks argue, and are refusing to budge.

Google and Android Pay, on the other hand, is understood not to demand a cut of the interchange fee of transactions.