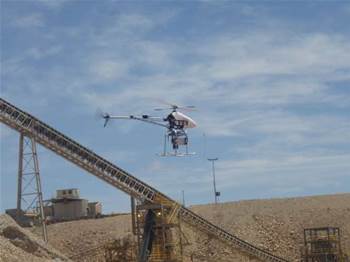 Australia's top miners have opened a new front in their march to automation, flying unmanned aerial vehicles in increasing numbers at remote sites across the country.

An exclusive iTnews investigation reveals the growing acceptance of UAVs as a cost-effective, time-saving and risk-averse alternative to terrestrial survey mapping and other conventional methods of image capture for photogrammetry. Photogrammetry is the practice of determining the geometric properties of objects from photos.

"Ten years ago, I would have had a rat's chance of convincing any mine surveyor to take a UAV on," HELImetrex CEO Ray Gillinder says. "These days it seems to be a lot more acceptable."

The feasibility of UAVs is now being tested for everything from environmental scanning, subsidence monitoring, pit wall mapping, infrastructure assessments and even spare parts transportation to offshore liquefied natural gas (LNG) platforms.

"The technology itself is actually quite mature. I think people look at it as something almost futuristic but UAVs have been used in the military for over a decade now."

A new generation of aircraft is partly behind the growth in civil uses for UAVs. In particular, the emergence of the Gatewing X100 and several homegrown helicopter-style vehicles (collectively known as vertical take-off and land - VTOL - UAVs) has seen a surge in the number of operators in Australia.

Resources firms have followed suit. Pioneers like Newcrest Mining and Queensland coal miner Ensham Resources are being joined by the likes of BHP Billiton, Rio Tinto and Sibelco in exploring potential use cases for UAV technology at mine sites.

One of the first case studies for UAVs in the resources sector was the inspection of the fire-damaged West Atlas drill rig and Montara oil platform off the Kimberley coast of Western Australia.

The rig caught fire on 1 November 2009 during attempts to plug an oil spill. The spill is considered to be one of Australia's worst.

Perth-based Cyber Technology used "a couple" of its CyberQuad minis - usually reserved for "tactical military" operations, according to inventor Joshua Portlock - to inspect the fire-damaged structure about a fortnight later using a standard definition camera payload.

The CyberQuad is a VTOL UAV with four rotors. Its larger Maxi cousin is typically reserved for civil applications.

The UAV was operated from a support vessel moored "a few hundred metres off" the damaged rig, Portlock says.

The UAV pilot "flew the aircraft using virtual-reality goggles to provide real-time reaction to environmental and structural obstacles", according to the company.

"With other monitors, the rig inspectors could make some judgment calls in real time - 'Oh, can you look at that on the left? I'm curious if that's a failed structure'," Portlock says.

"It was quite valuable information for [the Montara rig operators] to get that oblique and close footage".

Portlock says the CyberQuad can be flown "through assets" if the pilot is "competent enough".

"If you do drift into a wall you tend to bounce off and keep going, as long as you don't have too much speed on," he says.

Read on to page two to find out how Ensham Resources, Sibelco and Newcrest have used UAVs.