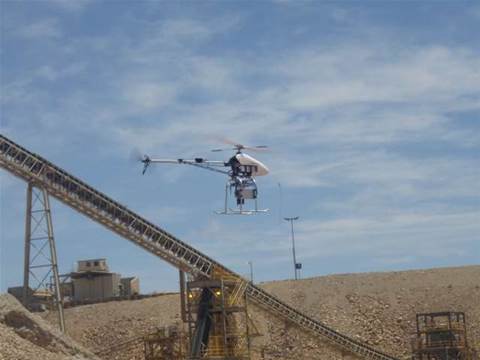 Another major early case study for UAVs in mining is Ensham Resources, a Queensland thermal coal producer that is majority owned by Japanese energy giant Idemitsu.

It contracted a trial survey of a coal stockpile and pre-strip dump using a modified Rotomotion VTOL UAV operated by HELImetrex.

Pre-stripping is the process of land clearance in preparation for mining works to begin.

The trial was conducted as part of an undergraduate thesis written by an employee at the time, Kiernan Smithson, who is now a graduate mine surveyor at another large mining firm.

The UAV was flown in late May 2010. Its results were compared to those generated using a terrestrial laser scanner - the most common conventional method for stockpile surveying.

The thesis ultimately concluded that laser scanning was faster and more economical for stockpile surveys. However, the UAV performed well on the pre-strip dump, where "line of sight was poor for laser scanning and the area was very large, requiring many scans and increased travel time [for surveyors] between scans".

In short, UAVs held promise but weren't ready for widespread usage in the mines yet.

HELImetrex's Ray Gillinder - whose machine was used in the Ensham trial - disputes any broad conclusion that laser scanning is better suited to stockpile surveys than a UAV, particularly when it comes to accuracy.

He cites the example of stockpiles where coal is reclaimed from underneath the pile to be fed onto a conveyor and taken to a ship or train for transport.

"That tends to cause a bit of a cone effect inside the middle of the stockpile, and thats something that a terrestrial laser scanner won't see," Gillinder says.

"We've had scenarios where [a customer has] said, 'Our figures don't match up with your figures, why is this?'

"Well, you've got 50,000 cubic metres of coal difference simply because you haven't equated for the cone effect from the underground loading [reclaim] mechanism.

"And therefore the guts of that stockpile is actually hollow. There's nothing there, it's just a volcano-looking thing."

Gold and copper miner Newcrest is also known to be a pioneer of using UAVs for stockpile surveys, however little is publicly known about their usage. A spokeswoman for Newcrest did not respond to requests for comment.

The alternative to a VTOL aircraft is a fixed-wing design UAV - typified by the Gatewing X100, which counts the Australian arm of Belgian mineral giant Sibelco among its customers.

Sibelco mines an array of minerals that include silica sand, dolomite, feldspar and minerals sands at "about 30 worksites" across Australia.

"Sibelco are trialling a fixed wing UAV for supplementing aerial surveying at some of their sites," surveyor Stephen Talbot tells iTnews.

"It has only been a couple of months and the UAV has been utilised a limited number of times.

"At this stage Sibelco is unable to offer a firm comment on the success or otherwise."

A March 2012 e-newsletter from Australian X100 distributor, Position Partners, notes that "every flight has gone according to plan so far" for Sibelco.

Typical flight time on one battery is between 30 and 40 minutes. "One of our sites covers two square kilometres, and I'd do about three flights, and you'd probably be looking at about one and a half hours of flight time," Talbot says.

Talbot tells iTnews that Sibelco is investigating "potential advantages ...[of] cost and flexibility" when using UAVs.

There is also a safety component, although this is true of using any UAV system.

This is the first part of an extended series by iTnews on the use of unmanned aerial vehicles in mining. Stay tuned tomorrow for the next installment.