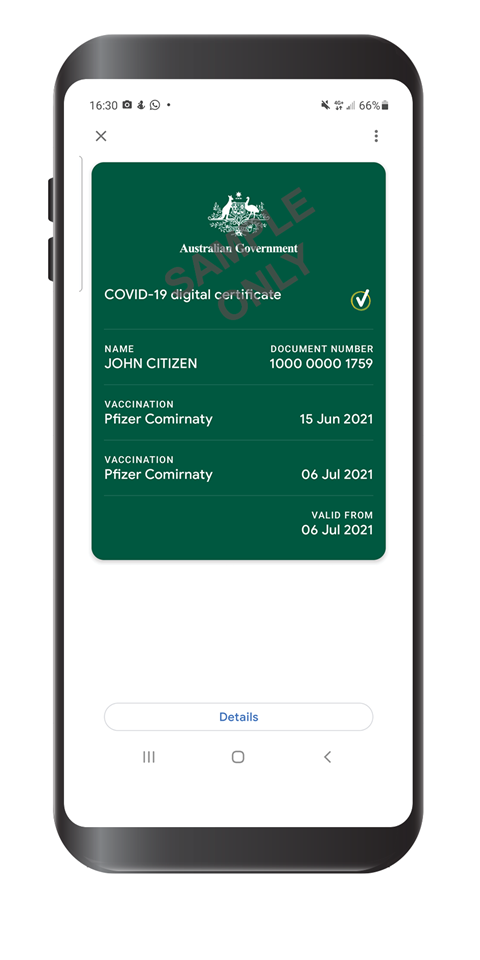 Can now be added by those fully vaccinated.

Australians fully immunised against Covid-19 can now store their digital vaccination certificates in their Apple and Google digital wallets for ease of access.

But those wishing to do so are being warned to switch off cloud backups to ensure the proof of vaccination is not stored on overseas servers.

An update to the Express Plus Medicare app over the weekend allows those who have received two shots of an approved vaccine to add their digital certificate to the wallets.

Until now, the digital certificate – which is automatically generated after two jabs – could be viewed or downloaded from the app and viewed through the Medicare online account.

The certificate shows the date a person received their two does of Pfizer or AstraZeneca, as well as their name, date of birth and a unique document number.

Those who have had only a single jab are not eligible for a certificate, but can view their proof of vaccination through the recently re-platformed Australian Immunisation Register.

“We know Australians are increasingly using digital wallets so people can choose to store their certficate in this way, if it suits them,” she said in a statement.

“It replicates the certificate they’re already able to access through myGov.”

Before a certificate can be added to a wallet, users are warned that “a copy of your certificate will be stored on servers outside of Australia” if cloud backups are enabled on the device.

“If you have iCloud or other cloud backup applications enabled on your device to backup your data, when you select 'Accept', a copy of your certificate will be stored on servers outside of Australia,” a notice reads.

“If you choose to proceed, you acknowledge that Services Australia will not be accountable under the Privacy Act 1988 in relation to… another third-party’s handling of your information.”

Certificates that are stored in digital wallets also miss out on fraud prevention features applied in the Medicare app such as a parallax effect that allows the Coat of Arms to shimmer when tilted.

Access to vaccination certificates through digital wallets was flagged in February, when the government first revealed plans for a proof of vaccination.

“Later in the year, about October we estimate, we’ll have a vaccination certificate that will be… internationally recognised to facilitate when people are moving out of the country and into the country, being able to recognise others' certificates,” he said.

"That is something that has been a common feature of the conversations I have been having with other leaders."

The government also plans to develop a My Health Record app that gives Australians access to vaccine certificates, pathology test results and information on vaccination bookings.

In a request for tender issued last month, the Australian Digital Health Agency said the app will display an “animated tick” in green, amber or red to denote an individual’s “Covid-19 digital status”.