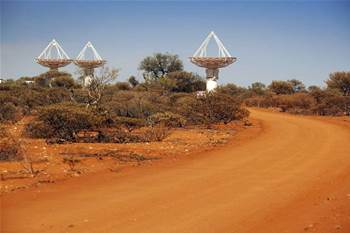 ASKAP was considered a precursor to Australia winning the SKA project.

Organisers of the Square Kilometre Array project have decided that Australia and South Africa will jointly host the $2 billion radio telescope.

The SKA Organisation said its members had "agreed on a dual site solution" for the project.

"The majority of the members were in favour of a dual-site implementation model for SKA," the organisers said in a statement.

The decision comes only a month after organisers indicated they were exploring new "implementation options" instead of eliminating either of the final two bidders.

At the time, the SKA Organisation did not respond to questions from iTnews as to whether it would consider sharing the radio telescope.

Australian and South African bid teams had been working on respective local arrays that were hoped to be precursors to winning the much-larger SKA.

The $100 million Australian SKA-Pathfinder (ASKAP) project comprised 36 antennas and was expected to be completed in 2013.

South Africa's MeerKAT array of 64 dishes was expected to be operational in 2016 (pdf).

The SKA Organisation said both ASKAP and MeerKAT precursor dishes would be "incorporated into Phase One of the SKA".

"The majority of SKA dishes in Phase One will be built in South Africa, combined with MeerKAT," the organisation said.

"Further SKA dishes will be added to the ASKAP array in Australia.

Statements issued by the CSIRO and Australian Science and Research Minister, Senator Chris Evans, indicated that Australia would begin constructing 60 dishes for Phase One in 2016.

According to the CSIRO, Australia would build "60 mid-frequency SKA dishes equipped with phased array feeds as well as an array of low-frequency antennas".

The dishes were to work in conjuction with ASKAP, and "networked together" with antennas in Africa. Preliminary science operations were expected to take place by 2020.

Evans noted that "any aspect of Phase Two [was] dependent on satisfactory performance in the first phase".

The dual-win scenario was welcomed by Australia, after an expert panel recommended rival bidder South Africa be awarded the SKA project outright, according to reports earlier this year.

Evans called it an "outstanding result ... after many years of preparation and an intensive international process".

“Sharing the project means researchers will get the best possible results by capitalising on the respective infrastructure and strengths of both sites," he said.

“Australia and New Zealand are looking forward to playing a leading role in delivering the SKA telescope and working with the international community to bring this exciting project to fruition – a project that will redefine radioastronomy and transform science as we know it.”