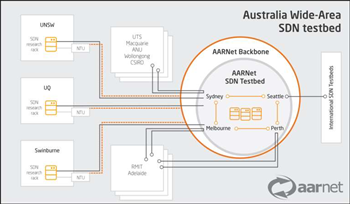 Australia's Academic and Research Network (AARNet) and the Data61 unit of the CSIRO are behind the SDN testbed, which builds on earlier efforts in collaboration with international partners.

AARNet and Data61 have formed a consortium which includes nine universities and received a $300,000 linkage infrastructure, equipment and facilities grant from the Australian Research Council to deploy SDN in their labs, the academic network said today.

Over the next one to two months, the institutions will be joined by researchers from Macquarie University, the Royal Melbourne Insitute of Technology, University of Queensland, University of Wollongong and the Australian National University.

The SDN setup spans some 16,000 kilometres and has a core of four NoviFlow OpenFlow switches located at AARNet sites in Sydney, Melbourne, Perth and Seattle in the United States.

They are managed by virtual machines in Sydney and Melbourne that run the Open Source Network Operating Software (ONOS) and despite the vast geographical distance separating the underlying infrastructure, the system appears as a single, distributed router.

AARNet chief technology officer David Wilde told iTnews the project was aimed at testing whether SDN networks can be applied at the scale telcos operate at.

“There’s a lot of work on SDN networks in a data centre or a university campus. We’re interested to see if the technology can be applied over a longer distance… We want to test how SDN OpenFlow can be used across a large-scale telco network,” Wilde said.

“At the moment, if connectivity between the hubs is lost, it just stops working, so our intention is to work out ways to keep the network working. There’s a number of ways you could configure devices.

“You could make it so that if connectivity is lost, the edge devices continue working on their existing settings. But in a secure environment, in some cases you might want to shut the network down if there’s an issue.”

Through the Seattle gateway, the Australian academic SDN testbed can peer with further international testbeds in the US, Europe and elsewhere, AARNet said. Already, the Australian SDN project peers with the US Department of Energy's ESNet and the Americas Lightpath (AmLight) academic network.

According to Wilde, the potential of inter-domain SDN – where one network sends configuration instructions to another – is enormous.

“Right now, connecting between an SDN network to any other network is done through BGP (border-gateway protocol) so from the outside the switches look like any other network, but within the testbed it’s pure SDN,” Wilde said.

“The question is could things work better? Could neighbouring or distant networks interact with each other to improve network service for important tasks, or provide end-to-end quality of service across networks?”

However, Wilde acknowledges there are major risks and hurdles that inter-domain networks will need to overcome before they are commercially practical.

“How you secure against those risks is an unanswered question – the kind that researchers love. So the feasibility or otherwise of inter-domain SDN is one of the things they’ll look at."

The project kicked off a year ago, when Vijay Sivaraman from the University of NSW secured funding from the Australian Research Council. At this stage, the ARC is funding the project for three years.

However, Wilde said researchers hope to secure partnerships with the private sector.

“We’re using the launch event as an opportunity to evangelise the testbed, and we’re hoping for the researchers to work with private organisations in the future."

The technology could also be used to intelligently shift and connect compute resources to data storage, so as to move large volumes of information withough taking congested paths, he added.

“The main potential is to provide tools for researchers in Australia to level the playing field, because in Australia we don’t have any large, local chip vendors. Because SDN is based on software, it’s a field local researchers can make a big contribution to," Wilde said.

Data61 principal research engineer Craig Russell said his organisation hopes to see SDN being widely accepted as a viable technology to help commercial entities solve problems, and used as an incubator for startups and to stimulate ideas and concepts that end up as marketable products.

Currently, SDN is seen as new and untested technology, according to professor Vijay Sivaraman of the UNSW School of Electrical Engineering and Telecommunications, and this acts as a barrier for uptake for companies and organisations that could benefit from it.

Sivaraman hopes the testbed will demonstrate that SDN is not just a great idea - on paper - but that it works in practice, under real-life conditions.