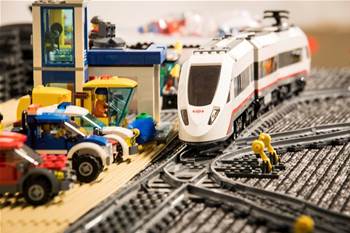 Some of Australia’s largest private sector organisations will face off against Canberra’s three biggest agencies in the government’s second cyber war games next week.

Cyber security experts from key industry sectors, including banks, telco and energy will take part in this year’s event, aimed at boosting cyber security skills through a series of real life scenarios.

It follows the success of last year's shootout, which is understood to have been the first and largest security training exercise of its kind to be conducted by the federal government level.

This year’s cyber war games, codenamed ‘Operation Shell Breaker’, will use the same Lego smart city that was the centre of last year’s event to represent the contest in real-time.

Six teams will take turns attacking and defending the model’s critical infrastructure networks such as power and water supplies.

But unlike last year, in which five teams were constructed from across ten agencies, only the Department of Human Services, Australian Taxation Office and the Department of Home Affairs (including its portfolio agencies like the Federal Police and ASIO) will represent the government.

However they will be pitched against, and work with, representatives from 12 private sector organisations to orchestrate a response - a realistic reflection of how the government would look to respond to a major cyber attack.

DHS narrowly beat the ATO and the then-Department of Immigration and Border Protection last year to win the inaugural cyber war games.

The result mimicked the findings of a cyber resilience audit of the three agencies earlier that year, which found only DHS was compliant with all four of the Australian Signals Directorate’s top four threat mitigation strategies.

The ATO has now joined DHS, reaching compliance with all four top four mandatory minimum cyber security requirements last financial year, while Home Affairs now has all but one of strategies in place.

Minister for Human Services and Digital Transformation Michael Keenan said the cyber war games were important to help agencies “sharpen [their] skills and to stay ahead of the curve”, in what is a constantly evolving environment.

“The event also brings agencies and the private sector together to mirror the way we would all need to work together during a major cyber incident,” he said.

“It’s incredibly important that we test our strengths and refine our practices this way, so we’re well prepared should something of this nature happen in real life.”

Operation Shell Breaker will be held at DHS’ cyber security facility in Canberra over three days from September 12.