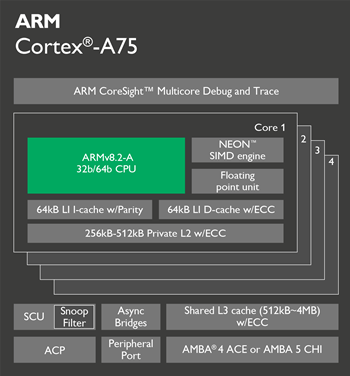 Based on its ARMv8.2-A architecture, the Cortex-A75 and Cortex-A55 designs use the company's DynamIQ technology, allowing them to be clustered with as many as eight processors in one system.

Fitted with a new high-performance memory subsystem, the Cortex-A75 could be used in laptops running Windows as well as massively scalable servers, encroaching on fields traditionally dominated by rival chip vendor Intel.

The company also released a second-generation graphics processing unit design, the Mali-G72, based on its Bifrost architecture.

The Mali-G72 is similarly faster than earlier Bifrost-based GPUs, with up to 40 percent better performance while slashing energy use by up to a quarter.

ARM said the 850 MHz Mali-G72 - with up to 32 shader cores - enables console-quality gaming on mobile devices, supporting up to 16 times multi-sampling anti-aliasing for graphics.

Mobile chip makers and device vendors such as Qualcomm, Samsung and Apple utilise ARM processor designs which power billions of smartphones and tablets.

The British company was acquired by Japanese tech giant Softbank last year in a blockbuster A$40 billion deal.