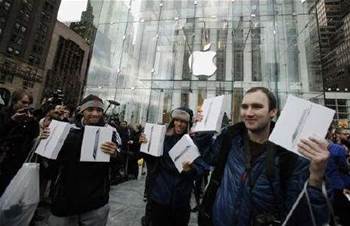 First iPad took a month to sell that many.

Apple sold close to 1 million units of its next-generation tablet computer during its debut weekend in the US, analysts estimated.

By comparison, the original version of the iPad, which launched in April of 2010, crossed the one-million mark 28 days after its launch.

The iPad 2 went on sale in the United States on Friday evening at Apple stores, AT&T and Verizon Wireless outlets, as well as Target, Wal-Mart and Best Buy stores, greeted by thousands of eager customers.

Ticonderoga Securities analyst Brian White said it was difficult to find an iPad 2 over the weekend.

"Our field checks over the weekend indicate that the iPad 2 sold out at every Apple and non-Apple store we contacted," White wrote in a research note.

"In fact, all the stores had worked through iPad 2 inventory by Saturday afternoon, and there were no new iPad 2 deliveries on Sunday."

Wedbush Securities analyst Scott Sutherland said: "We would not be surprised to see Apple sell closer to 1 million iPad 2's in the opening weekend."

Best Buy on Friday said some of its outlets ran out of the tablet and its accessories within 10 minutes.

The newest iPad is thinner, faster and features a pair of cameras for video chat. The price remains the same as the first-generation model, starting at US$499.

The iPad 2's early success is a warning sign of a global tablet bubble, where supply could outpace demand for tablets by about 36 percent, said J.P. Morgan analyst Mark Moskowitz.

Samsung and Motorola have already launched tablet devices, while Blackberry maker RIM and HP are set to release similar products in coming months.

Apple's share of the tablet market is expected to be 61 percent in 2011, whereas whereas the company's rivals are likely to have a tough time attracting customers, Moskowitz wrote in a note.