Apple CEO takes a one year hit on pay 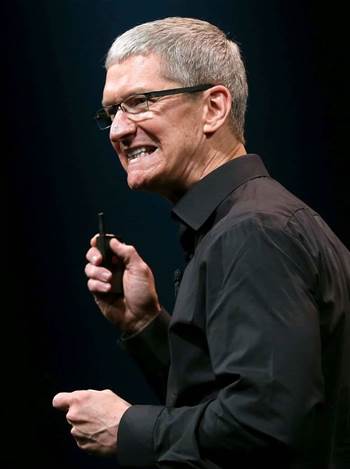 Apple CEO Tim Cook recieved a 2012 compensation package of just over US$4 million - a huge cut on paper for the top executive of the most valuable U.S. corporation compared to a 2011 package fattened by more than US$376 million in long-term stock awards.

Cook received the largest single pay package awarded to a company CEO in about a decade when he replaced Apple's legendary co-founder, Steve Jobs, shortly before Jobs' death in October 2011.

The maker of the iPhone and iPad made the 2012 compensation disclosures in a regulatory filing on Thursday. Cook, who is in his early 50s, joined Apple in 1998 and became CEO in August 2011.

Virtually all of Cook's US$376 million bonus in 2011 was in stock awards that will vest in two chunks - one in 2016 and the other in 2021. This structure was intended to keep Jobs' longtime lieutenant at the helm for many years.

In terms of base salary, Cook actually received a 50 percent increase to US$1.4 million for 2012, and the same 200 percent bonus that other top Apple executives like CFO Peter Oppenheimer earned, Apple said in a regulatory filing on Thursday.

The 2012 compensation package for Cook also pales in comparison with his 2010 pay, which was 14 times higher, when he served as chief operating officer.

But Tim Ghriskey, chief investment officer of Solaris Group - which counts Apple stock as the biggest holding among the approximately US$2 billion it manages - said Cook's package was "normal CEO compensation."

For example, Yahoo's CEO, Marissa Mayer, a former Google high-flyer hired this year to try to turn around the struggling Internet icon, won a pay package worth more than US$70 million. Despite her lack of a CEO track record, her basic pay is comparable to Cook's, with about US$1 million in annual salary and up to US$2 million in an annual bonus.

Oracle's Larry Ellison, one of the most highly paid chief executives in the United States - and also the world's sixth-richest man, according to Forbes - received total compensation for the year ended May 31, 2012, of US$96.2 million - almost all of it in stock options.

That compared with US$77.6 million for Ellison in the prior year.

Cook's longtime boss, Jobs, famously received US$1 a year in salary in the three years before he stepped down, though in 2000 he too received a stock option that analysts say was valued at almost US$600 million at the time.

Cook will not receive any stock awards for 2012, Apple said in Thursday's filing.

While Apple's shares are roughly 35 percent higher than when Cook became CEO, they have fallen more than 27 percent since October, when they hit a US$700.10 high. The stock has declined amid investor worries about intensifying competition in the mobile phone market and growth prospects in important markets including China.

(Reporting by Sinead Carew and Liana Baker in New York, Jim Finkle and Tim McLaughlin in Boston and Edwin Chan in San Francisco,; editing by Kenneth Barry and Matthew Lewis).