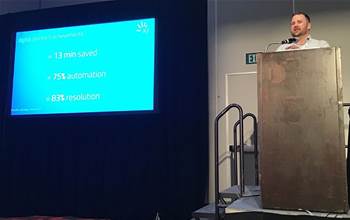 Uses analytics to hear what customers are really asking.

Australians might well know they want to say, but when it comes to talking robots, pretty often we just don't say what we really mean.

After years of trying to navigate the nuances of how customers speak in their natural environment, utility AGL has resorted to training its chatbot Alfie to comprehend Australians’ penchant for understatement so the machine can make a decent fist of linguistic vagaries.

That means enabling the bot to recognise the “implicit meaning” of an interaction and potentially acting on it faster.

The energy company is using analytics to identify any implicit meaning that may be present in a customer interaction.

The “Australian gift for laconic understatement”, as one commentator once called it, permeates Australian humour and language.

Getting a chatbot to recognise, understand and act on it is a very Australian problem in the world of conversational artificial intelligence. But as virtual assistants like Siri have been localised to deal with Australianisms, it seems more tools are likely to interact more natively in future.

Linford said that customers often approached AGL in a roundabout way to get what they wanted.

“An example of this is a customer saying, ‘I think my bill might be due’ - what they're actually saying is ‘I'd like to pay my bill’,” he said.

“What a customer actually says and what they mean, especially the English language,may be two very different things, so it's very important to focus on and understand what the implicit meaning of an utterance is and then really make the most of that better understanding.”

“It really didn't take too long for us to figure out that customers are never just going to come in and ask for their account balance without having a follow-on journey,” Linford said.

“If a customer comes in asking for their account balance, through our analytics, 9 times out of 10 that means they actually would like to get a payment extension on their bill.”

Though the chatbot might recognise an implicit meaning present, it doesn’t attempt to second-guess where the customer is going with a request to avoid misunderstandings.

“If we do use implicit meaning, we will always confirm we've got the customer into the right journey,” Linford said.

If the chatbot thinks a customer wants a payment extension, it won’t offer the extension without first confirming it is indeed on the right track.

Alfie is now in its fourth iteration and is based on IBM’s Watson Assistant. It was born conceptually in 2016 as part of AGL’s $300 million digital transformation.

Over that time, the team behind Alfie has grown from just Linford to a small room of staff, including an IBM architect that has been embedded in the team over the past year as the conversational architecture is enhanced.

“We started off very bootstrapped, with a lot of stakeholders that were quite concerned with what AI and automation would do to customer experience,” Linford said.

“Now, through our results, we're able to get a lot of buy-in and build our team.”

The results so far include shaving an average of 13 minutes off a customer’s interaction with AGL.

“We were able to really simplify the journey and remove any of the ‘busy work’ that crept in over years and years through our customer experience and our call centre process,” Linford said.

Linford said that Alfie had automated about 75 percent of administrative effort and was able to resolve about 83 percent of the interactions it handled, without requiring escalation.

Disconnection is a curious use case, given the historical difficulties many Australians may have encountered when trying to break up with a service provider.

“We did not offer disconnections on our website which was a real gap in our customer experience,” Linford said.

“So we built that out in the bot experience. Within about four weeks we were able to deploy that into our new home experience, so if a customer just wanted to disconnect, we were able to take that order and fulfil it in much less time that it would take a web chat agent to handle.”

Allowing Alfie to handle disconnections represents a 17 minute saving in the interaction time, and means a human agent does not have get involved.”

In the past, service providers may have made disconnections difficult - including that they be handled by a human agent - in a bid to persuade the customer to stay on because retention was cheaper than new customer acquisition.

But - again, using analytics - AGL saw many instances where there was limited or no retention opportunity to be had anyway.

“The use case actually came from our retention team. They came to us and said, ‘Our retention agents also double as sales agents, we’re having to deal with a lot of straight disconnections that didn't have an opportunity so a customer moving overseas or moving back in with their parents’,” Linford said.

“By having the analytics built in right at the start, we were able to see approximately 80 percent of the [disconnection] journeys completed had no retention opportunity.”

Roboticising the disconnection process also made it simpler to manage variations in processes.

“We were able to also introduce a lot of smarts into that that agents would have to rely on their previous knowledge to understand,” Linford said.

“Things like in South Australia, we attend disconnections Monday to Thursday rather than Monday to Friday like every other state in Australia.

“We were able to build these smarts in to collect specifications for those disconnections.”

Alfie’s evolution is not only a product of what AGL wants but also what its customers think.

The utility has set up a community engagement portal where a select group of AGL customers are invited to try out new features, provide feedback and suggest additions of their own.

“If there was something that I wish we'd known at day one, this would be it - getting in front of your customers as soon as humanly possible is incredibly important,” Linford said.

“Not only did it allow us to prioritise our feature development based off true customer feedback, we were really able to get to the nuts and bolts of what customers thought about this solution overall.

“Trust me - they didn't hold back. If they didn't like something you would hear about it, which was great, because it really allowed us to pivot quite quickly and deliver solutions that customers actually saw real value in.

“It also allowed us to support the rest of the business through validating features quite quickly.”

Linford said that AGL is planning to bring several customer experience enhancements to market in the near future.

One of these use cases will make it simpler to upload photos of self-service meter reads.

“We're in the process of creating a smart app to integrate with our mobile app where it will augment the experience of a customer having to read their meter,” Linford said.

“In Australia we have about 200 different types of meters. We used to get photos of customer's faces when they didn't have the camera on their phone turned around the right way, or photos of gas meters when they were trying to take photos of electricity meters.”

Linford also said that forthcoming tools could make it easier for customers to “actually understand their energy use and make real time decisions based off that energy use.”

“That's where I'm looking to lead my team,” he said.