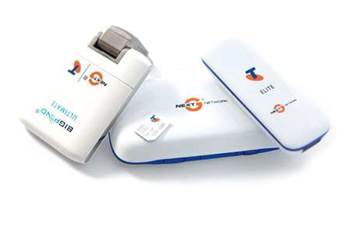 Still the fastest option out there, by a shrinking margin.

There was a time when summarising Telstra’s broadband offerings was surprisingly easy: it was expensive, it was fast, and that was all you needed to know.

But the telco has done a lot of work over the past twelve months to its plan pricing and the devices it offers mobile broadband with, and that’s changed its profile for better and worse.

We tested with a Telstra MicroSIM for iPad, Telstra Wireless Hotspot (Pre-paid only), Telstra Elite USB and Telstra Ultimate USB.

The Elite and Ultimate USB are Sierra Wireless modems. Telstra is the only carrier not to utilise a Huawei solution here, but it’s also the only one to jump over the 7.2MBps barrier; the Ultimate USB is a dual channel HSPA+ modem technically capable of up to 42Mbps, although even Telstra admits up to only 20Mbps is likely.

Telstra once again took out our speed crown with the highest recorded speed in our tests (9.08Mbps in the Sydney CBD) and the best overall average, when compared to Vodafone, Optus, Virgin, VividWireless, and Three.

But the real story of Telstra’s speed figures was in their extreme variability and how the distance gap between Telstra and its competitors has shortened considerably since we last tested.

We suspect this may be due to the huge number of new customers Telstra’s taken onto its network, but it’s also worth noting that its regional NSW figures were particularly low, affecting the overall average. In any case, it’s also proof that no network is utterly bulletproof.

In our regional and Queensland tests Telstra performed surprisingly poorly, being outperformed by every other available carrier, but it did hold the distinction of being the only carrier to have signal absolutely everywhere we tested.

Every other carrier had problems in one or more test areas, whereas Telstra’s data just kept chugging along, albeit not always at the fastest rates.

Telstra’s data pricing used to be prohibitive, and at the cheapest points that’s still sadly true. But if you’re in the market for a multi-gigabyte post-paid data deal, the prices come down substantially, and they’re even cheaper if you’re an existing Telstra customer; our indicative pricing is for customers of mobile broadband only.

Telstra is also the only nationally available data provider to shape its mobile broadband once you exceed your quota, which is an excellent value option. On the pre-paid side, Telstra’s still more costly than its competitors, although the margins have shifted with some of the higher priced plans.

For the second year running, Telstra takes iTnews' sister publication PC & Tech Authority's Labs award; with speeds like this there was no way it couldn’t. Relative value per gigabyte has improved markedly since last year, but at the cost of a speed edge Telstra once absolutely owned.