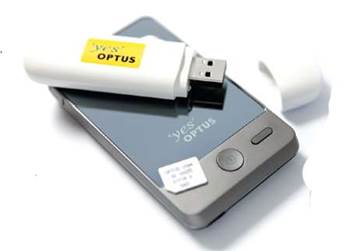 Unlike the other Huawei modems we tested with, the E173 has an annoying plastic cover that must be snapped off in order for the SIM to be swapped out, rather than a sliding tray for easy access.

The Optus login software is simple enough to both install and run, but it’s simply the Huawei login manager with an Optus splash screen bolted onto it, same as every other vendor. The Mini Wi-Fi Hotspot is more visually appealing with a mirrored finish, although this makes it hard to read the screen in direct sunlight. On the plus side, its battery life was very good.

In speed terms, Optus’ broadband products performed in the middle to upper tier of the pack, most notably topping the charts for one of our regional NSW and our Queensland test. This suggests a relatively solid speed profile, with the only black mark against it being the fact that its Mini Wi-Fi hotspot refused to get a connection in our other NSW regional test.

As with most of the Virgin tests (being both the same network and company) the interesting data here is how relatively close Optus’ best figures are to even the dual HSPA+ Telstra figures, something that wasn’t the case in iTnews' sister publication PC and Tech Authority's tests last year.

Last year, we bemoaned the fact that Optus’ 24-month post-paid plans halved the value after twelve months. That limitation is thankfully gone, replaced by a scheme whereby data is paid for at a rate of $0.08 a MB during peak times and $0.04 a MB off-peak.

Unlike every other carrier that simply gives you a data total to work your way against, Optus makes it complex to figure out how and when you’re using data, or to work out how much data you’ve got left, although the night-owl timing of the off-peak period means that most customers probably won’t use much off-peak data anyway.

It’s a genuinely weird system for a post-paid customer to have to juggle value left over rather than data usage, and it makes working out comparative value unnecessarily complex.

On the post-paid pricing side, Optus’ plans seem a lot easier to decipher with some good plan values and expiry dates, but again the detail of the small print betrays a major problem. Most carriers charge data in 1MB blocks, even if you use less, although Virgin is a notable exception here, charging only per actual Kb used.

Optus goes it alone with charging data in massive 10MB blocks. There’s a slight sop to fairness with the first 30MB per day only being charged as 10MB of usage, but that’s still far more expensive in real terms than every other competing carrier in the pre-paid space.