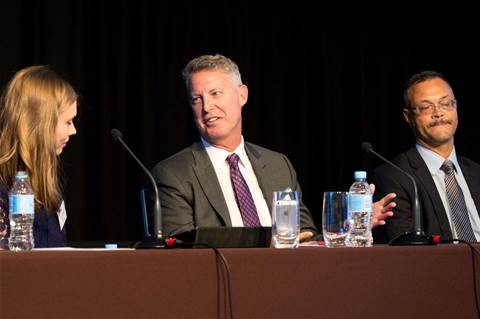 A wary public service finally chalks up some wins.

With whole-of-government whoppers and shared services shockers fresh in our collective memory, the number of government IT projects that kicked big goals for multiple agencies in 2015 suggests Australia’s private sector has matured a great deal in the past few years.

At this year’s Benchmark Awards, the NSW government’s GovDC infrastructure project, the federal Human Services MyGov authentication solution and the NeCTAR cloud project were each celebrated on stage.

To some degree, all three involved the sharing of technology assets between peers in the name of efficiency - something akin to a shared services model.

It was a rare showing of bravado for a time when most technology leaders have understandably kept ambition carefully in check.

History hasn’t been kind to those in public policy that see shared IT services as the most efficient means of producing better technology outcomes in government.

Between 2005 and 2008 alone, attempts to centralise government technology functions were set in place that we’d all sooner forget:

Even in New South Wales, which has scored far higher in iTnews’ assessment of IT strategy maturity, the prevailing trend was to dissolve shared services function - as evidenced by the recent decision to outsource the IT functions of ServiceFirst and to absorb Businesslink into the Department of Family and Community Services.

So what went right with this year’s finalists? There are a number of reasons why they bucked the trend, each pointing to more mature approaches to architecture and procurement.

We’re most certainly in a very different IT landscape today than the mid-2000s.

The price of storage has plummeted, the use of x86 compute virtualisation has exploded, and cloud computing offers both unprecedented scale, a lower price and easier-to-consume delivery model.

On the client front, the desktop SOE has all but made way for smartphones and other mobile devices, and a workforce that demands device choice.

Procurement functions across Australian governments have been slow to adapt to these changes.

The leaders of the NeCTAR, MyGov and GovDC projets won out because they managed to strike compromises between the cloud-like agility their users sought and the regulatory framework they had no choice but to work with.

Pedro Harris, executive director of NSW Finance, had to be pragmatic when pitching to reduce the government’s bloated footprint of 130 data centres.

On the one hand, his plan to spend $200 million as anchor tenant of two state-of-the-art data centres might have appeared extravagant at a time when most CIOs were looking to reduce spend on internal systems and move to cloud services.

On the other, there was very little appetite for a wholesale shift of a sovereign government to a cloud provider owned by a foreign entity.

Harris nonetheless recognised that government could achieve something approaching the same scale as cloud providers themselves.

And they wouldn’t necessarily have to build their own facilities. He would instead use the aggregation of the government’s IT buying power to reduce the cost of services offered to agencies from within their own trusted zones using a ‘community cloud’ model.

“We saw a lot of business cases coming from government agencies for building new data centres,” Harris told his peers at the CIO Strategy Summit in the lead up to the Awards.

“Our alternative was to consolidate and bank savings against a future spend. If we all pooled together, we estimated we could save both on building costs and on operating costs and drive a much lower PUE [power usage effectiveness].”

GovDC attempts to resolve a tension that besets every IT shop: between the level of control and assurance gained from building and maintaining your own systems, versus the faster and more immediately cheaper route to value of consuming IT services offered by the broader market.

Harris views IT strategy very much through an economist’s lens. He designed the data centre network around the concept of the suburban shopping mall - where the variety of services available attracts a larger share of buyers, and vice versa.

Critically, he obtained senior ministerial support for the project - which in turn set in place deadlines for which agencies had to move into the two facilities. The first major failing of many shared services projects - giving agencies a choice whether to opt out - was resolved from the outset.

Harris reports that the facilities are now 80 percent full. But his work isn’t yet done. There are “intangible benefits”, he said, to pushing the project farther than the point at which a shared services project would long ago have rolled out the ‘mission accomplished’ banners.

Read on for details of DHS' approach...