The BYOD solution we want

Australian IT managers are less than impressed with the enterprise mobility solutions currently on the market, seeking a tool that allows them to manage and provision applications to all user devices, whether fixed or mobile.

Over half of the end-user respondents to an iTnews survey said they were ‘less than satisfied’ or ‘definitely not satisfied’ with the enterprise mobility solutions currently available. 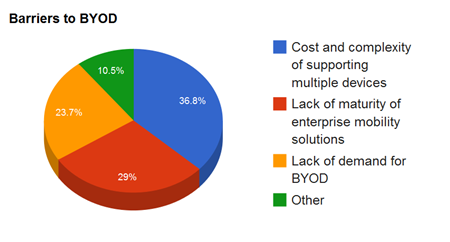 “We want one pane of glass to rule them all,” said one survey respondent, with others calling for a solution that merges the scope of Microsoft’s System Center Configuration Manager and Blackberry’s Enterprise Server - with the ability to build application stores and for administrators to deploy and remove applications from client PCs, tablets and smartphones.

Three in four respondents said they were eyeing off a BYOD policy in their workplace.

But most respondents said they would seek to limit the number of mobile device platforms to support, which would suggest a preference for ‘Choose your own device’ over ‘Bring your own device’.

As for the number of platforms to support, the sweet spot appears to be three - 46 percent of respondents intend to support three mobile platforms, 27 percent said “more than three”, 15 percent would limit choice to two smartphones and only 11.5 percent would stick to the traditional fleet model (provisioning a single, company-wide device). 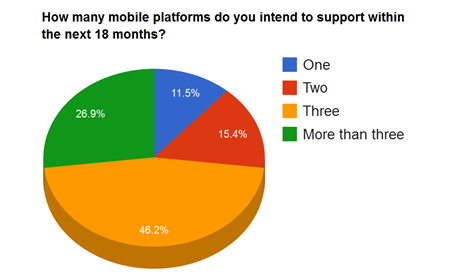 The mobile platform most enterprises intend on supporting is Apple’s iOS - with half of the respondents naming it their ‘top priority’ and 42 percent designating iOS a ‘medium priority’.

This relates, perhaps, to the desire to control all client devices from the same pane of glass. The current tools most administrators use to manage PCs and laptops is predominantly a Windows affair, and this has been cited by some CIOs as the main driver for adoption of the Surface Pro. It might also suggest that outside of the Samsung ecosystem, IT managers still fear the lax security issues that have plagued the Android operating system.

The survey also found CIOs and IT managers hold a dim view of BlackBerry’s future - some 58 percent of respondents said they would not support BlackBerry in the future, one in four said it was a “low priority” and only a handful named it as their top priority mobile platform. 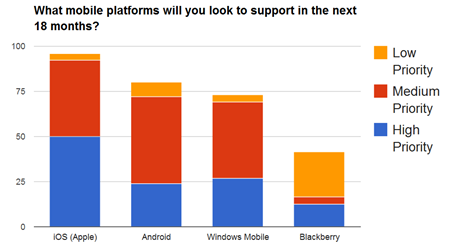 All respondents wished to deploy basic email, contacts and calendaring to mobile devices, with the next highest priorities bring office productivity applications and document management/stores (Sharepoint etc), with about half of respondents prioritising workflow solutions for field staff.

Responses to the survey suggest IT managers see standalone MDM (mobile device management) offered by the likes of AirWatch, Good Technology and MobileIron as a stop-gap solution to a problem that should have been solved by IT management and virtualisation vendors (such as Citrix, Microsoft and VMware) in concert with mobile OS vendors.

The largest number of respondents said MDM vendors were currently best placed to meet their enterprise mobility management needs (36 percent versus 29 percent for virtualisation vendors), but a far larger number (over 50 percent) said they wanted to manage mobility at the level of the virtual machine.

While virtualisation and MDM vendors will fight for supremacy in terms of management tools, all respondents noted that mobile operating system vendors had “a role to play”. As one respondent noted, a dependable heterogeneous management tool for all clients is only possible if mobile OS vendors provide open APIs that “allow MDMs to actually work” across all devices. 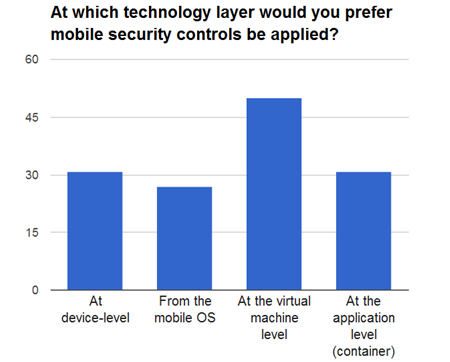 Stay tuned for the final report into the ‘True Cost of BYOD’ next week.