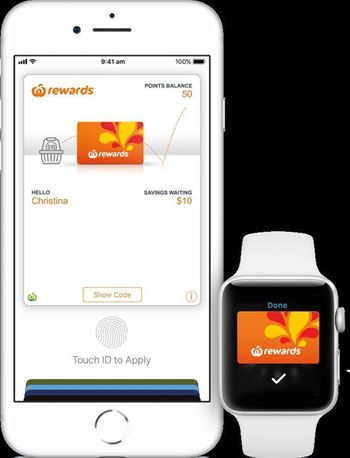 Not yet for Tasmanian customers.

Woolworths will allow iPhone users to store a digital copy of their loyalty card on their mobile device, but Tasmanian customers will have to wait a bit longer before they can take advantage.

The retail giant today said iPhone users could store a digital Woolworths Rewards card in their Apple Wallet app on the device.

That could allow them to use their smartphone at the point of sale both to collect loyalty points as well as pay for groceries if they have Apple Pay enabled.

“Having their Rewards card in Apple Wallet will ... allow us to provide our customers with offers they want, when they want them,” Maes said.

To make use of the digital Rewards card, users have to rest their finger on their device’s Touch ID and hold the top of their phone near the keypad on the point-of-sale equipment.

However, the digital card can’t be used in all Woolworths properties. Woolworths lists the exclusions as “Petrol, BIG W, Dan Murphy’s, Tasmania” in an FAQ document.

Tasmania is presently excluded because it is the only Australian state or territory that doesn't use the Woolworths Rewards loyalty scheme.

"The loyalty program in operation at Woolworths supermarkets in Tasmania for over 20 years is the Frequent Shopper Club," a spokesperson for Woolworths said.

"We've found our customers in Tasmania prefer the Frequent Shopper Club, and therefore maintained that program as the Woolworths loyalty program in Tasmania.

"We're actively looking at incorporating the best of both worlds (Woolworths Rewards and Frequent Shopper club) with our loyalty program in Tasmania, so watch this space."

The digital Rewards card is also unable to be used for fuel discounts at petrol stations, meaning users must still carry around a physical card if they use the loyalty program in this way.

“You will be unable to use Rewards card on iPhone at petrol stations (eg Caltex) for the fuel discount;­ you will be required to use your plastic card,” Woolworths said.

Woolworths also indicated it is working on making similar functionality available for owners of other devices, meaning an Android-compatible digital card could be forthcoming at some point in the future.