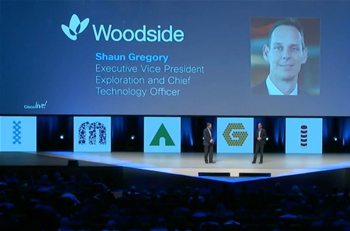 Woodside Energy is measuring its ability to move at a “digital pace” in part by the number of “orange shirts” - slang for field workers - that now regularly appear via video in its Perth headquarters.

“The edge of the network for us is 200 kilometers offshore,” Gregory said.

“There are a lot of challenges to get the modern bandwidth that we enjoy today here in Melbourne in an offshore oil & gas facility.”

Woodside has been using Cisco equipment since at least 2003, and expanded its dealings with the networking vendor by participating in an IoT innovation centre in Perth from 2015 onwards.

Gregory said that Woodside had been on a digital transformation journey for the past five years, and really measured the success of that work on how it impacted staff.

“When you get down to it, [the metric that matters is] the impact on the people,” Gregory said.

“You can see in some of the video footage [shown at the conference] that today, you can walk by any of our meeting rooms and you'll see orange shirts - orange shirts is someone in the field - video-presence in.

“That was not in the old office, and so that - to me - is saying collaboration is genuine, it's not forced, it's just available.”

Gregory said that the user experience joining the company’s headquarters and remote operations was also designed to “just work”.

“I think that was our goal at Woodside was make IT just work,” he said.

“Everyone [used to] groan when they said 'let's have a video conference', whereas today it's just push a button, join the meeting and it just starts.”

Gregory said that uptake of videoconferencing in Woodside had also meant fewer expensive delays to the progression of projects.

“Even for myself, last week we had an executive meeting scheduled and I couldn't make it, I was sick, and they were going to reschedule in a week's time and that would have created a week's delay in a decision that was needed,” Gregory said.

“Instead we just invited WebEx to the meeting, I joined remotely, the meeting happened and so there was no delay.

“It's those small things replicated amongst the entire workforce that has the biggest business impact. Even when an executive can move at digital pace.”

So far, the trials have always been couched in terms of the benefits they might provide Woodside, including to what extent robots might be able to handle some 300 dangerous tasks.

But Gregory indicated today that NASA was also benefiting from the trials.

“A lot of our facilities are a long way offshore, measured in hundreds of kilometers in hostile areas,” he said.

“NASA looked to us as well as a place to test their remote capabilities before they go even further remote into space and beyond.”